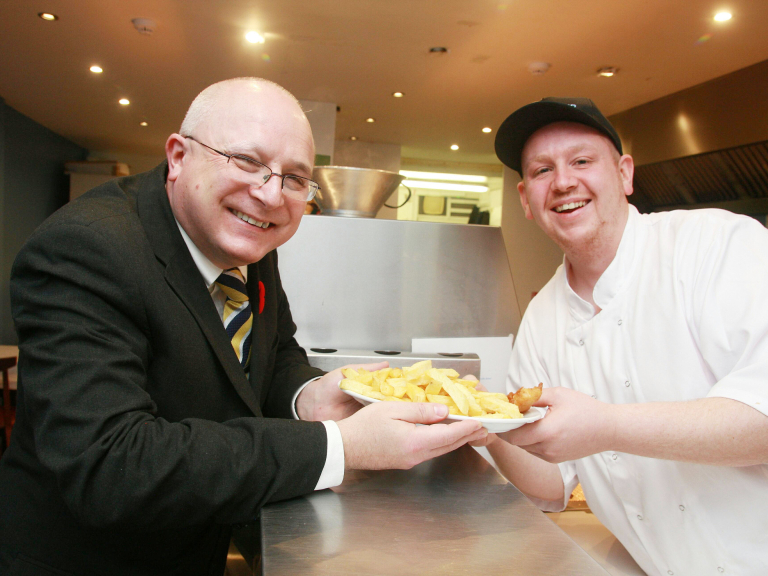 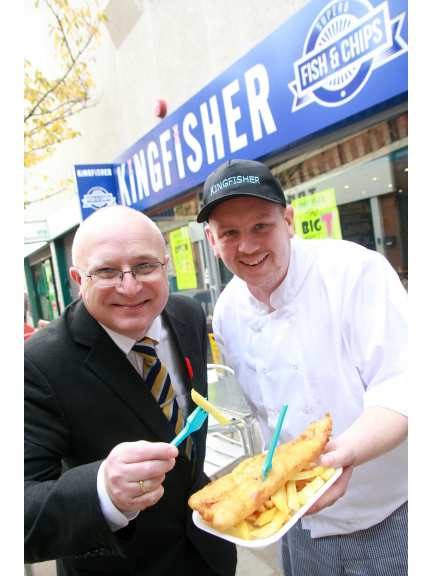 The popular Kingfisher chippy is now being run by the third generation of the Cartwright family, after it recently moved into a new café premises at the shopping centre.

Jack Cartwright, 29, took over the reins from his dad Philip Cartwright when the chippy recently moved into its modern new home.

It comes 20 years after his dad Philip first opened Kingfisher fish and chips at Stretford Mall in 1997, having inherited the family business from his parents, Jack’s grandparents.

The new cafe at Stretford Mall seats 36 people and has a more modern open plan fit out which allows customers to see their food being prepared before service.

The chippy is a favourite with locals, with popular dishes including the £5 OAP set meal of a small portion of fish and chips.

Jack, 29, said: “Our family has been doing fish and chips for three generations now. I’ve been involved in the family business since I could walk, and when I left school I dived in.

“I’ve managed my dad’s shop at Stretford Mall for years so it’s a real privilege to take over as owner. I’ve always worked under my dad so to be my own boss is completely different and really exciting.

“We realised when we were moving that it’s actually our 20-year anniversary in Stretford too, and over the years we’ve served more than a million portions of chips, so that’s something worth celebrating.”

The Cartwright family also run several other Kingsfisher chippys including at Tibbs Street in Manchester, Salford Precinct, and Altrincham.

The business sources all its ingredients in the UK including cod and haddock from sustainable stock, from a longstanding regular supplier in Whitby, which are cut into individual fillets on site at Stretford Mall each morning.

Similarly, all of the chippy’s potatoes come from Lincolnshire and Colchester, all prepared on site by staff, some of whom have worked at the shop since it opened.

Jack runs the Stretford Mall café with four members of staff who help him prepare the meals from scratch each day.

“The new shop is a lot more modern in terms of the fit out, it’s more open plan and that’s good for the customers – everybody loves to see their food being cooked,” he said.

“We’re also in a much better, more prominent location, so we’re starting to see more footfall as well.”

Gareth Wilkins, centre manager at Stretford Mall said: “Kingfisher chippy is a firm favourite with our customers, and their customers’ loyalty is testament to the good quality of the food.

“We’re delighted that Jack’s been able to follow in his father’s footsteps and take on the café as it moves into this more prominent more modern unit at Stretford Mall.

“We wish Jack and the Cartwright family all the best and hope they will be here for another 20 years to come.”

Kingfisher customer Alma Scrivener, 78, from Chorlton, has been a regular at the café in Stretford Mall for many years.

“I’ve been coming here for years, I come every Tuesday, every Saturday and sometimes on a Thursday, and I think it’s absolutely marvellous,” she said.

“Jack and the staff are all lovely. My partner loves the sausage sandwiches and they cut the crusts off for him.

“It’s got a real family atmosphere. Everyone knows each other, all my family come in. It’s like Coronation Street!”

Jack said the secret to Kingfishers’ success is a good product, and good customer service.

“We work to a really high standard. We care about the provenance of our products, the fish comes from our regular supplier in Whitby and the potatoes come from Colchester or Lincolnshire. It’s very important for us to serve quality local produce.

“Our fryer is a Hewigo which is a Birmingham firm that makes a really powerful range, which cooks beautiful fish and chips.”

Jack added: “Loyalty is important to us, we are loyal to our suppliers and customers, and they are loyal to us.”

To find out more about Stretford Mall visit www.stretfordmall.co.uk of find the shopping centre on Twitter of Facebook