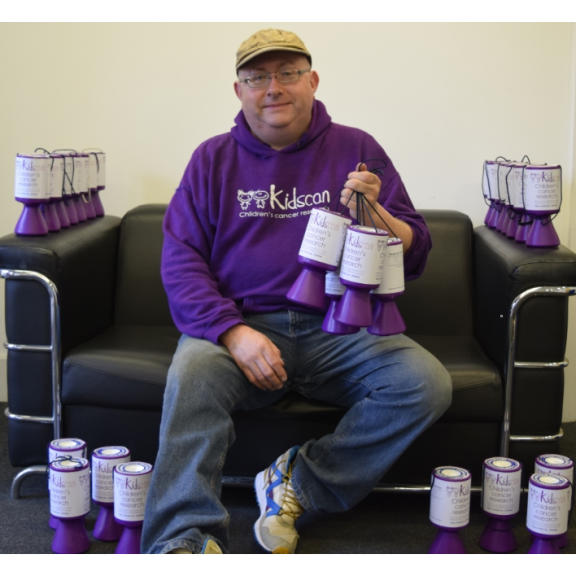 During his decade working at children’s cancer research charity Kidscan, dedicated charity tin collector Ian Johnson has travelled far and wide across the country collecting a staggering £450,000 in small change.

Come rain or shine, Ian has travelled to newsagents, cafes, takeaways, pubs and bars everywhere from Wolverhampton to Kendal, and Rhyl to Doncaster collecting Kidscan’s purple tins, mostly by public transport. Both Ian and the public’s unwavering commitment to Kidscan has raised nearly half a million pounds for the charity, a weight of 2ps equal to that of 90 black cabs!
Money raised by these collection tins all goes towards Kidscan’s pioneering research into discovering new, targeted treatments for childhood cancers – treatments that are gentler for children’s bodies, reducing short and lifelong side effects of those currently available, including mobility and learning difficulties.
Ian Johnson of Kidscan, commented: “People may not think that our purple tins on counters across the country make much of a difference, but they’re a core part of our fundraising. These humble tins are helping to fund vital research into new treatments that will help children with cancer to survive and thrive as this staggering total shows.”
Cancer is the leading cause of death in children in the UK with around 1,600 children being diagnosed each year. Unfortunately 1 in 5 of these will not survive. Every day six families receive the terrible news of a childhood cancer diagnosis. Kidscan are striving to change these figures through ground breaking research, giving every child with cancer their best chance at life.
The key to Kidscan’s success in recruiting and retaining 1,100 charity tin hosts is down to Ian’s commitment to visiting every host at least three times a year, keeping them informed about Kidscan’s work and sending certificates of thanks for them and their customers.
Any business interested in hosting a Kidscan purple tin should contact Ian on 0161 295 3864.