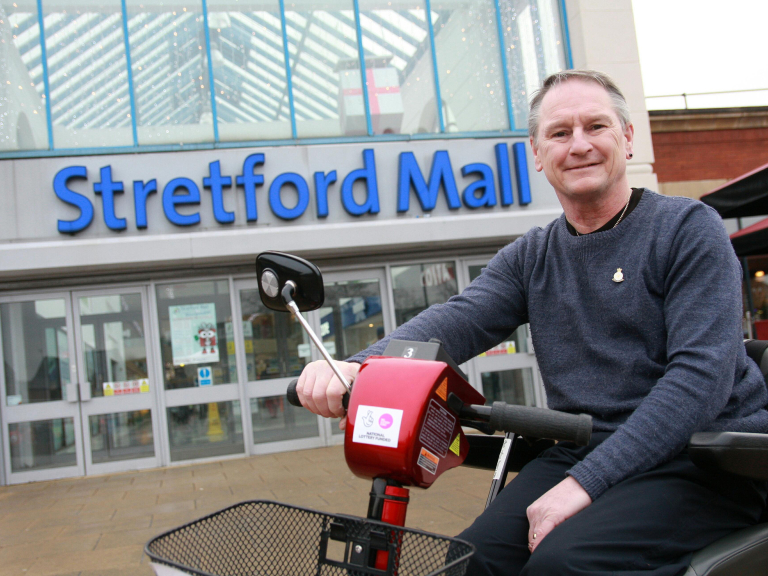 A FORMER soldier whose ill health left him unable to work and battling depression has told how he turned his life around by volunteering, and is now celebrating ten years with a Shopmobility charity.

Phil Simmons, who is chairman of Trafford Shopmobility and is based at Stretford Mall in Manchester, says being involved with the charity over the last decade has given him a “real purpose” following a series of struggles.

The 53-year-old, who lives with his wife Hilda in Stretford, had to quit his dream job as a HGV driver due to Type 1 Diabetes before going on to sustain a serious knee injury and being left with crippling arthritis and needing 11 operations to date.

Trafford Shopmobility has been based at the popular shopping centre since 2013 and provides powered scooters and wheelchairs for people with limited mobility.

The service, which moved into a bigger unit at the mall last September, has more than 100 people registered who rely on the scheme to do their shopping.

Phil, who was originally from Old Trafford, said: “I’ve got a real passion for this charity and I can relate to the customers because of my own problems. It really does feel like the last ten years has just flown by.

“Volunteering for Trafford Shopmobility has given me a real purpose.

“I have a lot of health problems. I was suffering with depression and my doctor recommended me getting involved with volunteering.

“I saw an advert in the newspaper asking for volunteers to help out at Trafford Shopmobility and it started from there.

“I really enjoyed helping out and giving people the independence they deserve. I was doing general paperwork and helping out in the shop.

“Then they realised I was quite technically minded so I began to help with keeping the scooters operating, doing what I could maintenance wise and making sure they were safe.

“After about three years I was taken on to the board and made a director. The chairman said there was a vacancy and asked me to take it on which I was happy to do.

Phil, who has four step children, joined the Royal Corps of Transport as a 16-year-old and went on to become a driver in the army and later for a freight company in Manchester.

He was driving across the UK and Europe when the career he loved was suddenly snatched away from him.

Phil explained: “I left school and joined the army as a boy soldier. I was teaching gymnastics in my spare time while I was training for the army.

“I was very active and as a child I’d also been into athletics.

“I’ve been told that I did too much when I was young and it’s contributed to my problems now. It all built up.

“I was a driver in the army for 12 years and was mainly based in Germany. I also did a year in Canada.

“Unfortunately the army lost a freight transport contract and the work dried up. I loved driving so decided to leave the army so I could concentrate on it.

“It was 1992 by then and I immediately got work with a local freight company. I was driving all over Europe and I loved it.

“But after about three years I was hit with a bombshell. I developed Type 1 Diabetes and all my licences bar my car license were taken away from me so I lost my job.

“It was hard to deal with. They said it was unsafe for me to drive HGVs in case I had a hypo.

“I decided to knuckle down and began working alongside a local builder which I enjoyed.”

Unfortunately for Phil, just two years after being diagnosed with Type 1 diabetes he suffered a serious injury which was to leave him out of work for good.

He said: “I was doing charity work for Diabetes UK. It was a sponsored walk on the Pennine Way and I was raising money for a diabetes centre at Trafford General.

“I stumbled funny and my knee went. I knew I’d done something bad but I didn’t want to bother mountain rescue or anything so I hobbled on for six miles.

“My knee was like a balloon when I finally got back. Unfortunately I couldn’t have knee replacement surgery.

“I visited a specialist in Wigan and he explained that because the nerve endings were shot from the diabetes there was nothing they could do.

“I was out of work again and in constant pain. I still am now. I have to have morphine and a walking stick for life.”

More health problems developed for Phil, including arthritis in his joints and constant neck pain which has resulted in a total of 11 operations, and his struggles began to get on top of him, culminating with a battle with depression.

Thankfully he found his saving grace at the turn of 2008 in the form of Trafford Shopmobility, and he hasn’t looked back since. 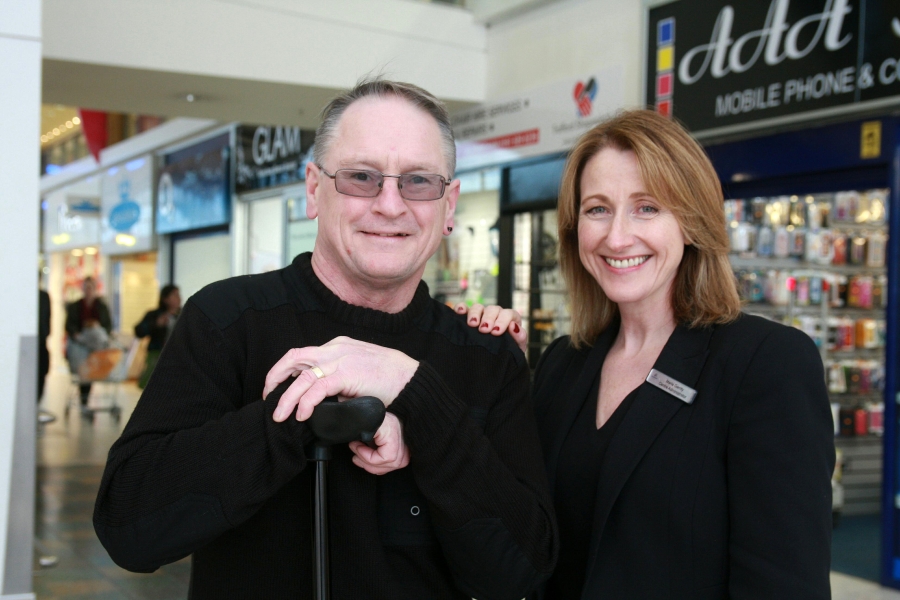 Phil said: “It’s been so good for me. I’m not under any pressure and I can do it at my own pace. I can rest when I need to.

“I’m unable to lift stuff and I can’t walk for long so it’s ideal. It gives me a purpose and makes me feel better about myself.

“It also makes my wife feel better. She’s my carer and is always worried about me.

“Together we’ve managed to overcome so many of my problems and now, touch wood, I’m moving upwards.”

Stretford Mall centre manager Gareth Wilkins said: “I’d like to congratulate Phil on reaching ten years with Trafford Shopmobility, which has been based at the mall for several years and is a vital service for people with limited mobility who want to shop at the centre.

“Phil is passionate about helping shoppers and plays a pivotal role in making sure the charity is able to carry on its fantastic work.

“He has gone through some enormous struggles himself and has to battle health problems of his own, but that has not prevented him from carrying out his vital volunteering work.”

Trafford Shopmobility’s headquarters is in Altrincham, where vice chairman Dave Griffiths, also runs a scooter service, and the organisaton is also appealing for more volunteers to help at both locations.

To find out more about Trafford Shopmobility visit:

www.traffordshopmobility.co.uk To find out more about shops, services and events at Stretford Mall visit www.stretfordmall.co.uk