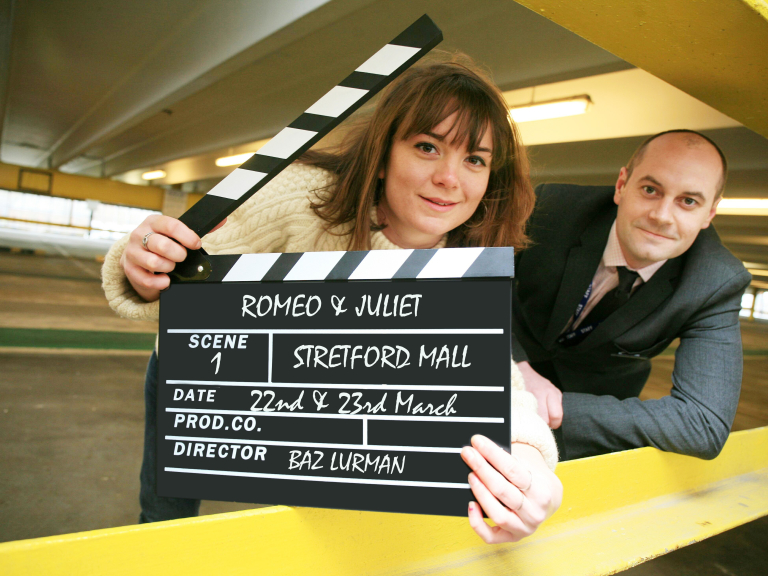 The first surviving film adaptation of Romeo and Juliet is to be screened at Stretford Mall more than a century after it first wowed silent movie audiences, as part of a unique pop-up cinema event.

Audience members are set for a magical experience as the film, directed by Gerolamo Lo Savio in Italy in 1912, is to be screened alongside a live performance by dancers who will weave among the crowd, accompanied by an ethereal electronic DJ soundtrack.

It will be the dramatic opening act to a unique pop up cinema event called the Spirit of the Essoldo, which will take over the top floor of the multi-storey car park at Stretford Mall, on Friday March 22 and Saturday March 23.

The first night is dedicated to Shakespeare’s tragic romance Romeo and Juliet with the 1912 silent film to be followed by a screening of Baz Luhrmann’s 1996 film adaptation of the classic play.

The event aims to bring the spirit of Stretford’s iconic art deco Essoldo cinema back to life, and is the brainchild of organiser Heather Garlick, owner of Stretford’s Sip Club.

Heather will be running a craft beer and cocktail bar on the night, and there will be food stalls from local vendors selling Indian street food, pizza, hotdogs, coffee and ice-cream.

They will continue on the second night for a screening of American action film Drive, starring Ryan Gosling, when there will also be a unique art installation of a giant popcorn monster serving snacks to the public.

Heather said: “I’m from Stretford and I walk past the Essoldo every day, and it’s such a shame that it isn’t showing films any more. I always imagine what it must have been like to watch a film there and we just wanted to bring that back.

“A group of us were sitting in my bar talking, and we realised between us we had a lot of experience running events, so we thought we’d take matters into our own hands.

“The venue at Stretford Mall is very urban it’s the 4th floor which is a huge place and the views are fantastic.

“I wanted to do something to reflect the urban nature of where we live, the edgy side of living in a city. The Mall have been great and the setting enables us to be a bit more edgy and gritty with our film choices. We wanted to have a proper pop up cinema suits Stretford.

“We wanted it to be like a night out so we’ve created different atmospheres.

“Friday night will be a bit romantic, ethereal, spacey kind of vibe with the dancers, and on Saturday we’ve got the Hollywood gangster film so it’s a bit more of a party night with a dystopian vibe.

“We wanted something that brought out the ethereal nature of the film. A night to reflect the festival style of the Baz Lurmann film.”

Gareth Wilkins centre manager for Stretford Mall said: “We’re delighted to be hosting the Spirit of the Essoldo event. The team have worked really hard to come up with a wonderfully creative line-up. It’s set to be a spectacular weekend and something really special for Stretford.”

Heather is running the event with Alistair Todd, who is the project’s technical expert, out door events manager Annika Edge, and professional photographer David Donovan Brown..

Romeo and Juliet was performed in 1595 and tells the story of star crossed lovers from two warring families who fall in love with tragic consequences.

The play is first thought to have been filmed in 1908 in America, but that footage has been lost, so the footage from the 1912 film to be screened at Stretford Mall is the last surviving footage.

The silent movie features Francesca Bertini as Juliet and Gustavo Serena as Romeo. It lasts for half an hour and will be screened twice on the Friday night at 6.45pm and 7.30pm.

Heather said: “We chose Baz Luhrmann’s Romeo and Juliet because we wanted something edgy, but also with crowd appeal for a fun night.

“I was looking around for something interesting to put alongside it, I wanted it to be a bit different to a standard screening.

“I stumbled across this very early version from 1912 and I thought that might have been the kind of things people would have watched in the original Essoldo.

“It’s going to look absolutely fantastic with the electronic music and these really ethereal dancers.

“I travelled in India for a while and you watch the action a lot more when you can’t hear the scripts. It’s going to be a really special night.

John Howes of Manchester DJ collective Congburn will be performing an instrumental electronic soundtrack to create a romantic ethereal mood.

The performers are being lead by a newly founded dance collective in collaboration with Matrafisc Dance.

They said: “We’ve identified some key topics in the play and the film and we are playing with the parallelism of getting intoxicated by love and the experiences people have in the film.

“The audience can expect some dancers to come up close giving them quite an intimate experience. The ideas of love and passion will come out through the movement.

The food vendors at the Spirit of the Essoldo events will be Vaso Kitchen, serving contemoporary Indian street food, Ruddy Good Pizza, and Get Chucked from Urmston will be selling their infamous hotdogs. Ginger’s Comfort Emporium will be providing ice cream and Al Fresco wil be serving coffee.

Sip club’s pop up bar will be serving craft beer, wine and cocktails, and performance artists Foxdog Studios are building a giant popcorn monster which will call out customer’s names and spit popcorn into their bags, as an added treat for guests on the Saturday night.

Stretford has been without a cinema since the Essoldo on Chester Road, was turned into a bingo hall in 1965.

Originally known as the Longford Cinema, the now crumbling Art Deco gem opened in 1936 with a design considered revolutionary at the time, with under-seat heating, sound-proofing and air conditioning.

The grade II listed landmark has stood empty since its closure in 1995. Trafford Council announced last year that it was seeking to buy the building under a compulsory purchase order and bring it back into public use as part of its masterplan for Stretford town centre.

Tickets to Spirit of the Essoldo screenings are on sale now priced at £12.  Blanket and chair bundles are available to add on for £4 or guests can bring their own.

Issued for and on behalf of Ceidiog Communication