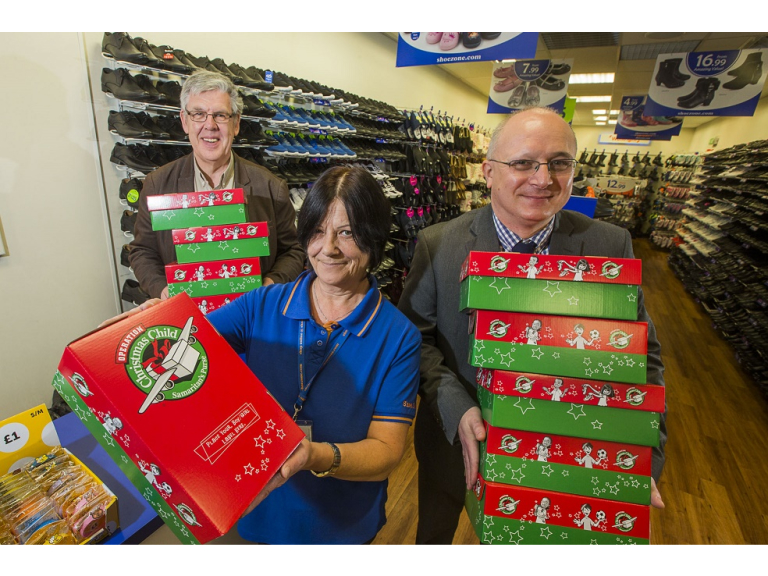 Shoe Zone at Stretford Mall, is acting as a collection point for goodie-packed shoeboxes for Operation Christmas Child (OCC), now in its 25th year.

People are urged to fill boxes with items such as toys, toiletries and sweets for distribution to crisis-hit areas around the globe, in an appeal set up to change lives at Christmas.

The charity has sent more than 100 million gift-packed shoeboxes to needy children across the globe over the last 25 years, and now Ian is urging kind hearted shoppers to back the appeal at Stretford Mall and “change lives” this Christmas.

He said a single shoebox could make a huge impact on the life of a needy child who might have lost their parents, live in poverty or face the devastation of war every day.

He appealed for Christmas shoppers to take time out of their busy schedules to think about children across the world who were living in terrible conditions by putting together a simple shoebox of gifts – and showing them they care.

“The North West has been a really strong supporter of this project and it’s a real reflection of the generosity of the people who live in the North West of England that we can reach out to these kids and let them know there are people in the UK who care,” said Ian, 63.

“This year we’re hoping to take shoeboxes to refugees who’ve had to flee conflict in the Middle East. There are now more than four million people living in refugee camps, many of which are children. We want to increase the shoebox appeal this year for this reason.

“Operation Christmas Child is a fantastic project. It’s a great way for people to remember Christmas and the true meaning of Christmas.

“It’s about remembering people who are not as fortunate, children who live in places where there is terrible conflict and children who lack love. You might not know them but you can change their lives.”

Shoe Zone at Stretford Mall has been acting as a collection depot for the past five years and last year collected more than 140 boxes from customers of the centre for the appeal.

Store manager Deanna Beckett, who has managed the store for the past seven years, said: “People are very supportive of the project and it seems to be getting bigger every year. There’s certainly more awareness about it now.

“All our Shoe Zone stores get involved nationally. The response has been great and we really feel like we’re doing our bit.

“We’re really grateful for the support. We have nurseries coming in with 20 to 30 shoeboxes and some individuals bringing four or five themselves. We also give out leaflets so people know what to include.”

Gareth Wilkins, centre manager at Stretford Mall said: “Operation Christmas Child is a very deserving cause and I hope the local community will rally around to take part.

“The shoe box appeal is a wonderful way for people to reach out and help those less fortunate than themselves while doing their Christmas shopping.”

Shoeboxes collected from the appeal are distributed to children in more than 150 different countries including Romania, Uganda, Kenya, Liberia, and Croatia. Since the project started, more than 124million children have benefitted from a shoebox gift.

A number of volunteers internationally are involved in the distribution process of the shoeboxes and families can track where their donation has gone if they download a barcode from the website and stick it onto the box.

“The shoeboxes are handed out freely on the basis of need,” said Ian.

“To watch how excited they are when they delve in, is magic. I remember a young lady in a school who was deaf and dumb. Her parents had both died in a road traffic accident and her grandmother, who had been looking after her, had passed away. She was very withdrawn and didn’t want to connect or engage with anyone.

“Somewhere in the UK, somebody had put together a shoebox full of well-thought out things in it. At the bottom was a bracelet and when we put it on the little girl’s wrist, within a couple of minutes, the girl started to respond and showed a real change in the way she was engaging with people.

“If only that person who put that bracelet in the shoebox knew what an impact they had made. It was the start of the healing process. This scenario is just an example of the impact that we see all of the time.”

Ian, who was a police officer for 25 years and before that a telephone engineer, has worked with the charity for 24 years, firstly as a volunteer and then as an employed member of the team.

“It’s never been a nine-to-five job but I love what I do. It’s incredible,” he said.

“I can’t believe I’m doing what I’m doing now. I loved working with people while in the police. Now I just work with amazing people every day.

“To meet with people who give their lives to making things better for other people is just incredible. I know people who work in remote Liberia changing the lives of people by providing water sanitation, education and lessons for women, being there to help at the forefront of the Ebola outbreak.

“There are many people around the world who have faced disaster. This project is a great way to celebrate Christmas and let them know they’re not forgotten.”

Anyone donating a box is asked to pack a combination of school supplies, toys and hygiene items in a colourfully wrapped shoebox before downloading a label from the charity’s websitehttps://www.samaritans-purse.org.uk indicating whether the gift is for a girl or boy and the age range. Lastly, they are asked to include a £3 donation with their gift to cover the cost of transportation, which can also be made online.

The collection takes place at Stretford Mall from November 1 to 18. For more information on what items should and should not be included in the shoebox and also how to track the delivery of your donation please visit: