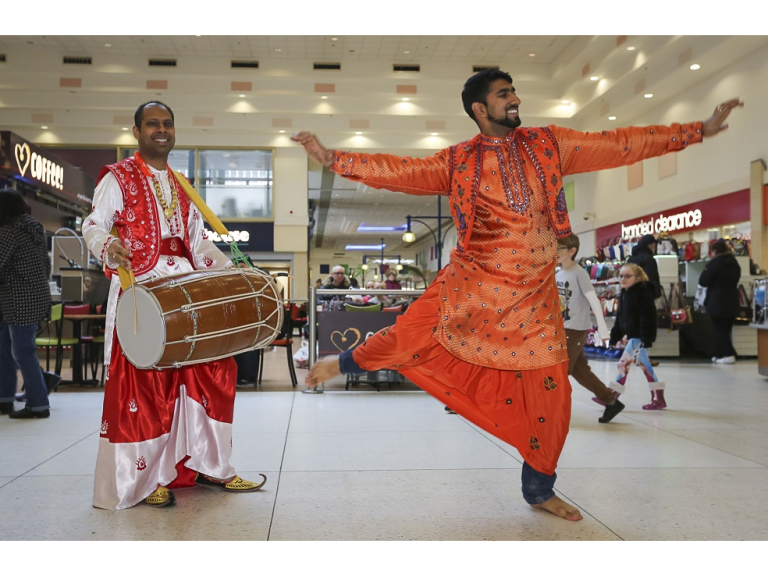 Banghra instructor Rajeev Gupta says he's excited to bring a troop of dancers to perform, and even teach shoppers some of his high energy moves, at the Vaisakhi Mela 2015 festival of Asian music and dance in May.

The festival will bring together traditional Indian and Pakistani performers, as well as Manchester grown Asian fusion acts, at Stretford Mall, for two days at the end of the spring half term – Friday May 29 and Saturday May 30.

It is being organised by Asian Arts UK and sponsored and hosted by Stretford Mall.

Rajeev's weekly Banghracise class at Gorse Hill studios in Stretford is gaining popularity as a way to keep fit and socialise without going to a gym. He also coaches workshops and organises performances in venues around the country.

Among his high profile events were two appearances on national TV. The first was at the London 2012 Olympics for which he led a troop in a specially choreographed piece to celebrate Britain's multicultural roots.

Now he's preparing a special programme of moves to perform at the Stretford Mall event, which is a harvest themed Vaishakhi Mela (Vaishakhi means harvest in Punjabi). The Vaishakhi Mela is particularly important in the Sikh calendar, but it is also marked by the Hindu and Pakistani community.

Rajeev will also be bringing along some Dhol drummers to provide an upbeat musical rhythm for the dances. He said: "It's a fantastic thing that can only be good for Stretford and the wider community across Manchester.

"The Vaishakhi is about people coming together from all parts of India to celebrate the harvest, to dance and to eat, and to bring good fortune and wealth for their communities and culture.

"I think we could do with more of this in Manchester, and so to create a happy atmosphere and bring the community together can only be a good thing.

"We'll be at the Stretford Mall Mela to perform some Bhangra dance and hopefully do some workshops to get the audience involved.

"We'll be doing some traditional harvest dances from the Pubjab northern region of India, and a lot of the moves are quite symbolic of farming, things like throwing seeds and collecting in the harvest.

"It's very high energy, when you finish you almost feel like it's an energetic high, perfect for a Mela."

Craig Topping, Stretford Mall Duty Manager, said: “It is very exciting to see our first dance act being confirmed for the Stretford Mall Vaishakhi Mela. We are delighted to have Rajeev and his dancers join us and it sounds like they will bring a real energy to the stage which our shoppers will enjoy.

“We are keen to hear from other community arts groups who might like to come and perform. Anyone can apply to take part with their Asian-inspired music or dance performance and the more diverse the better.”

Rajeev, 29, and a producer and reporter for BBC Radio 4 who lives in Cheadle, first started teaching Bhangra workshops at age 16, in Reading where he grew up.

His talent for dancing was encouraged by his mother, who although she was born in Nairobi, spotted his talent for the dance of his father's home region, the Punjab, who she had met while they were both working in Kenya, before moving to the UK.

Rajeev later set up Aston University's first Bhangra society while he was studying for a degree in Business and Politics.

He moved to Manchester seven years ago, and this is where he developed the Bhangracise brand he has become known for.

"It's a really good cardiovascular work-out, and we're finding we get a lot of people coming who wouldn't usually go to a gym and so wouldn't usually build health and fitness in as an everyday part of their life. It's also really sociable so they have a lot of fun doing it."

Taking part in the London 2012 Olympics opening ceremony was a "privilege" said Rajeev. And of his meeting with Alesha Dixon, he said: "She was great, she'd done a little bit of Bhangra dancing before when she was in Mystique, so she knew a little bit about the music. We got her doing a little light bulb changing move with her hand in the air, she was fun."

The full programme for the Stretford Mall event will be announced over the next few months, but so far the organisers have revealed the Friday will focus on dance acts including Banghracise, and the Saturday will be mainly about music.

Any acts who are interested in performing are being asked to get in touch with the organisers, former actor and broadcast producer Subash Pall and Kevin Roach, who jointly run Asian Arts UK.

Kevin said: "We are delighted to be able to announce Rajeev and his Bhangracise dance troop as a highlight of the Vaisakhi Mela 2015 at Stretford Mall.

"I'm excited about putting together the performance programme. We want to create a real buzz in the community and we would encourage anyone who is interested in taking part to get in touch."

Encouraging people to turn up and support the event, Rajeev said: "I'd say definitely come down and take part, hopefully it will bring a smile to people's faces and also help people come to appreciate Stretford Mall as a force for getting people to get together and do something different in their community."

Bhangracise classes cost £4per session of £20 for six sessions, and takes place every Tuesday at the Gorse Hill studios on Cavendish Road in Stretford. For more information visit www.bhangracise.co.uk/