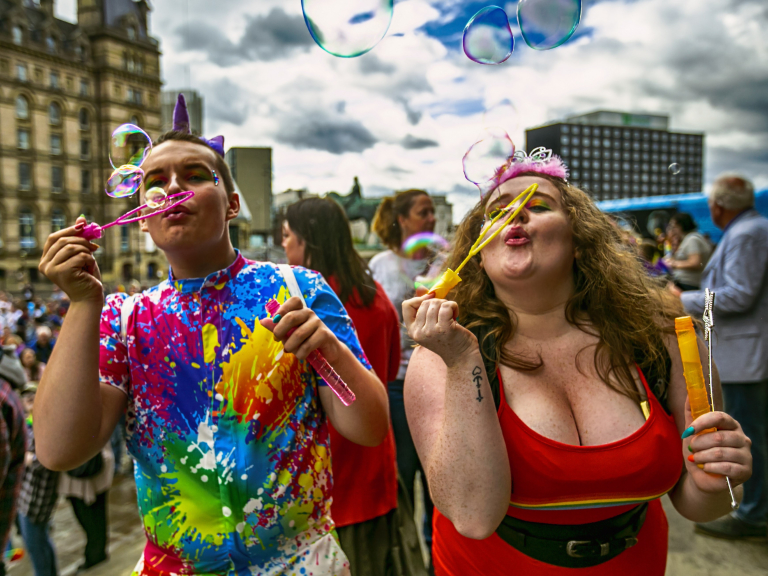 Pride in Liverpool will feature a dedicated ‘safe space’ for young people aged under 25 and their families for the very first time in 2019, with the addition of a Youth Zone, delivered in partnership with Young Persons Advisory Service (YPAS), to its festival site.

The Youth Zone will be located in the square between Vernon Street and Cunliffe Street, a short distance from the Barclays Stage area on Tithebarn Street. It will be open from 12noon - 6pm. The area will be alcohol-free and will offer a free BBQ and refreshments, provided by Bay Tree Catering, throughout the day.

There will be a chill-out area, supported by The Proud Trust, where young visitors can relax, play board games and enjoy arts and craft activities such as badge-making, as well as an acoustic stage where young performers can put their name down to perform. Some equipment will be provided but musicians should bring their own instruments.

Trans activist Charlie Craggs will also be in the Youth Zone with her Nail Transphobia pop-up nail bar, where visitors can get their nails done, while chatting to a trans person. The pop up has been facilitated by the city’s Walker Art Gallery, who will also be in attendance. Free glitter tattoos will also be provided by YPAS and Mermaids, a charity which helps young people who feel at odds with the gender they were assigned at birth, as well as supporting their families.

As well as entertainment on the Barclays Stage, headlined this year by Little Boots and Saara Aalto, and the LIMF Academy-programmed Showcase Stage, there will be a Community Expo in Exchange Station, featuring stands from organisations that provide support to the LGBT+ community. Exhibitors include Armistead, Rainbow Fostering, Sahir House, Open Table and Citizens Advice Liverpool.

Speaking about the new Youth Zone, LCR Pride Foundation Co-Founder, Andi Herring, said: “Coming to a Pride festival can be quite overwhelming for many young people and as an organisation we felt it was incredibly important to provide young people - many of who may be attending Pride for the first time - with a safe space.

“By partnering with YPAS and working closely with The Hive Youth Zone, The Proud Trust, Mermaids and New Beginnings Sefton, we have been able to deliver this. We are honoured to be working with these fantastic organisations, which provide support to young LGBT+ people across the Liverpool City Region throughout the year.

“Our Youth Zone supports our mission to make the Liverpool City Region the most inclusive and LGBT+ friendly region in the UK, ensuring that everyone can feel comfortable and safe during our Pride in Liverpool celebrations.”

Chris Porter from YPAS said: “YPAS and it’s LGBTQ+ team are delighted that LCR Pride Foundation has been able to take on the feedback of LGBTQ+ youth to include them in Pride in Liverpool celebrations, while maintaining a safe space for them.

“A lot of these young people will be experiencing their first Pride festival and we want it to be a positive, memorable experience that makes them feel part of their wider community. The special thing about this year is that there is a lot of collaboration with other LGBTQ+ youth providers across the North West and Merseyside as well as wider community partners.

“Inclusivity and collaboration make for a supportive community and that is what we need. These LGBTQ+ young people are the activists and leaders of our future so we best be nurturing them now!”

The build up to Pride in Liverpool will start on Friday 26 July, with Pride X Tate at Liverpool Tate in the Albert Dock. There will be free talks and workshops and the gallery’s Keith Haring exhibition will be free to enter for the evening. Film with Pride will be showing Are You Proud? at Picturehouse at FACT for the first time at 6pm, with daily screenings as various times until Tuesday 1st August and later that evening there will also be a Pride in Liverpool pre-party, as drag extravaganza, Gals Aloud comes to Heaven on Victoria Street.*

On Saturday 27 July the Pride in Liverpool action will begin at 10:30am, as members of the LGBT+ Community and its allies gather at the “March with Pride” muster point on St George’s Plateau, opposite Lime Street Station.

There will be a number of speeches at 10:45am from John Bird from LCR Pride Foundation, Metro Mayor, Steve Rotheram, Mayor of Liverpool, Joe Anderson, representatives from headline sponsors, Barclays and Merseyside Police.

There will also be performances from poet Ruthie Adamson a.k.a. ‘The Wonky Wordsmith’ and Torrid Star Productions.

The march will travel down Lime Street and along St John’s Lane, before joining Whitechapel. The procession will then go through the city centre via Lord Street before heading passing through Castle Street, Cook Street, Victoria Street, Stanley Street, Dale Street and Exchange Street East, before arriving at the festival site on Tithebarn Street.

The front of the march is expected to arrive at its destination at approximately 1pm. Road closures will be in place and people are advised to check travel advice in advance of travelling.

After the march, Pride in Liverpool, celebrations will begin with performances on the Barclays Stage, which has this year been programmed by Liverpool Sound City, including House of Suarez, The Vivienne, Queen Zee, Saara Aalto and Little Boots and a host of emerging talent on the Showcase Stage, delivered in partnership with LIMF Academy.

The fun will continue with Pride Sundae on Sunday 28 July, with Drag and Bottomless Brunches, a fundraising ‘Paddle for Pride’ at the Albert Dock, Storytelling sessions and evening entertainment at venues across the city.*

For updates before and on the day, stay tuned to Pride in Liverpool on Twitter and Facebook or visit https://lcrpride.co.uk

Issued for & on behalf of LCR Pride Foundation