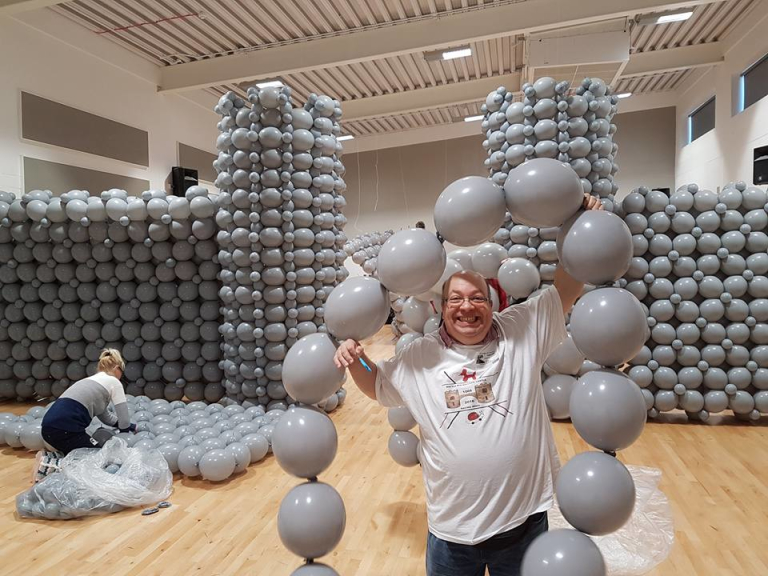 Following on from the last blog about a large balloon build I thought I would revisit one I did locally in October 2016 for the Battle of Hastings anniversary. Created and organised by Olivia Post (http://racingsnail.org/page6.htm). During October 2016 balloon artists joined force to create one giant piece of art. Headed up by Olivia Post and Colin Myles 20+ Balloon Artistes created a huge Norman castle to commemorate the 950th anniversary of the Battle of Hastings. The Sculpture is made from over 10,000 balloons and once inside the castle there are various scenes in balloon form, a giant medieval bed, the Bayeux Tapestry, King William on his throne, the Doomsday book, an armoury and finally king Harold with an arrow in his eye. Thanks to Qualatex Balloons and also to the staff and pupils of Battle and Langton Primary school. Watch the build here  https://www.youtube.com/watch?v=_Tctb58onvU

It got on the local news too – which you can see here http://www.itv.com/news/meridian/update/2016-10-12/school-builds-balloon-castle-to-celebrate-battle-of-hastings-anniversary/

What was my role? I inflated lots of balloons, installed castle walls and built and designed the weapons area.

If you would like to see how I can help you on a small balloon adventure, please contact me at www.DannytheIdiot.com