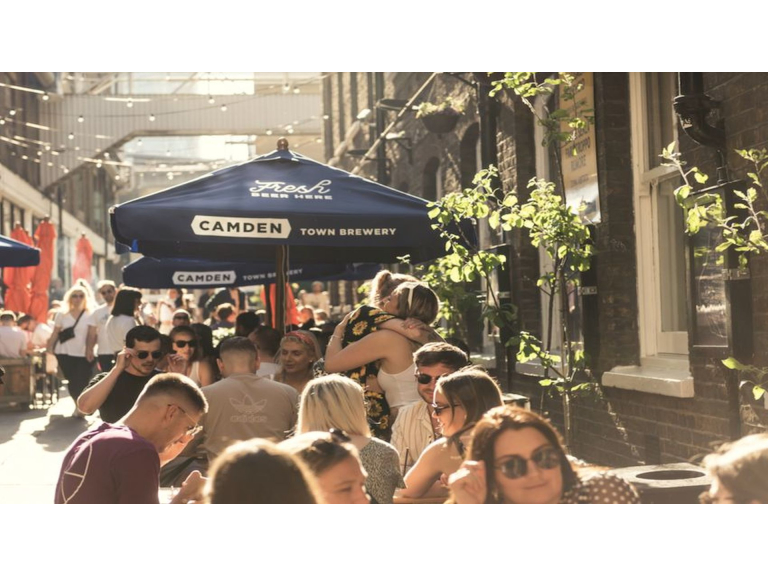 Curated in a distinct day/night cycle, the days will be full of food, drink, music, and pop-up shops while evenings get a bit more lively as DJs take over the space for the party to carry on.

Tucked away just off Brick Lane, Dray Walk will be the East's answer to fun in the sun! Curated in a distinct day/night cycle, the days will be full of food, drink, music, and pop-up shops while evenings get a bit more lively as DJs take over the space for the party to carry on. The outside terrace of will be lined with seating as the smell of Only Jerkin' wafts through the air, on others, expect a carnival atmosphere as DJs play throughout the day and late into the evening. Each weekend will bring a different vibe, some Saturdays will feature a record fair, others will host art pop-ups and some will feature talks from industry pioneers. The eight-week alfresco series will bring some much-needed energy back to the heart of East London which features fully covered seating and dancing areas. The first series of events will be called ‘Day X Nite' and feature all of the above and more.

Dray Walk will host food pop-ups in its Tap Room from What Willy, a young street food master that makes the most ordinary food taste out of this world. Rex Meek + Auld Hag will team up to create some delectable Scottish scran with others yet to be announced.

Luca Pilato, who manages the Dray Walk venue says "The launching of the Dray Walk this Summer has been a project close to my heart, after working for some time around the area we feel it's lost its vibrancy that it was once renowned for. Our series of events, pop-ups, and activities hope to bring some free fun back to an area that was always a special place. We hope to recapture a bit of the magic that made Brick Lane special and give an experience back to those looking for something different and exciting without having to spend big on tickets or entry fees."

Some of the party crews taking over the terrace include Rhythm Sister, a collective, platform and community promoting female, non binary, and trans DJs that will take over the booth on selected nights. Other crews of note include Modern Funktion which feature mutli-genre events, The London Disco Society which name says it all and Loose Legs bringing the big tunes. Artists performing over the summer include some Poly Ritmo, Poolsideconov, K-Lone b2b Facta, Tina Edwards, Mr Redley, Ariana V alongside Voices Radio doing a takeover too who're community based station.

As the weeks go by every weekend will host unique activities, some weeks showcase live art filling the gaps between the crowd whilst others will host record fairs alongside merch stalls and interactive talks around varied subjects across a broad spectrum of issues. None of these will be announced as those looking for something different this summer are pushed to explore something new.

Cafe 1001 have handpicked a bunch of DJ collectives, record labels, pop up shops and artists to join us by day as Dray Walk becomes an expression of the senses combining music, art, food and drink. Into the evening the vibes will make their way into Cafe 1001's loft space where DJs will play until late. The team has invited some of London's hottest talents to join us every Friday, Saturday and Sunday with a focus on quality music.