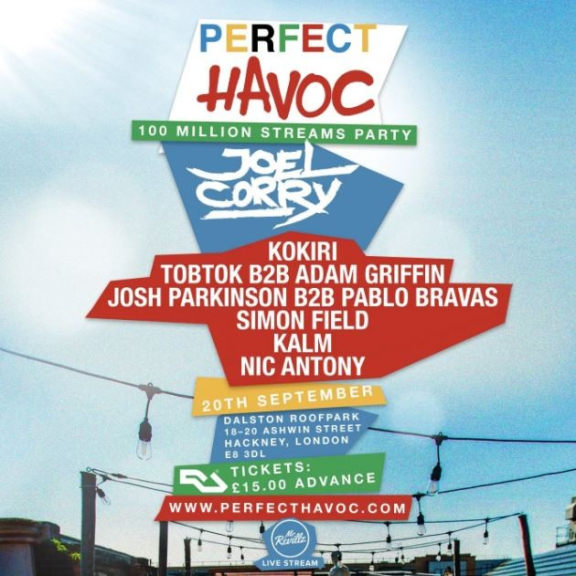 Hoxton-based record label, Perfect Havoc will mark hitting an impressive 100 million streams on Spotify, YouTube and Apple Music, with a special instalment of its Perfect Havoc party on 20th September at Dalston Roof Park in East London. The lineup features artists from Perfect Havoc’s management and label roster whose tracks have been crucial in breaking the 100 million barrier. Spinning the tunes are Joel Corry (who currently sits at #6 in the UK top 20 with his hit ‘Sorry’), Kokiri, Tobtok & Adam Griffin, Josh Parkinson & Pablo Bravas,Simon Field and KALM. Expect the very best in house and nu-disco as Perfect Havoc takes over Dalston’s only rooftop venue to showcase why it’s one of the most streamed indie labels around. Tickets cost from just £15 plus booking fee from  http://bit.ly/ph100party.

Not many young labels can lay claim to an achievement like smashing 100 million streams. Perfect Havoc can thank its pool of breaking talent including Oliver Nelson, Tobtok, Mahalo, Eat More Cake, Karen Harding, Kokiri, and Joel Corry, and its highly tuned ear for both underground and mainstream hits, which has seen tracks licensed to Atlantic Records, Ministry of Sound, Polydor, Toolroom, Thrive and Astralwerks.

Alongside the label, Perfect Havoc has been steadily carving out a reputation for unmissable events with parties across the world from San Francisco to Stockholm, Paris to South Korea, and on home turf in East London’s coolest spots.

Dalston Roof Park is a perfect setting for its next event. This rooftop oasis overlooks London’s skyscrapers and transforms what was once a forgotten space into a cool music venue; plushly turfed, brimming with flowers and palm trees, and boasting a Martin Audio Soundsystem. With a 5pm start, Perfect Havoc will showcase the sounds which have seen the label reach dizzy new heights, whilst watching the sun go down and the stars come out.

Headlining is KISS FM DJ and producer Joel Corry. The London-based artist made history in July 2019 when his rework of garage classic ‘Sorry’ became the UK’s most Shazamed song ever in one day and is now Perfect Havoc’s first UK Top 20 (top 10 on iTunes) single and is heading even higher. Keep an ear out for it in Dalston!

Next up is Perfect Havoc’s remix maestro, Kokiri. Everything this young Liverpool producer touches turns to gold. On Perfect Havoc, his remix of Karen Harding’s ‘Picture’ stayed firmly on the airwaves with Mistajam for weeks on end, and via a string a credible releases on Ministry of Sound, Nothing Else Matters and Armada, he counts Annie Mac, Pete Tong, David Guetta, Oliver Heldens and many more as supporters.

Long-time Perfect Havoc artist, Tobtok, joins the party. The young Swede’s dancefloor-driven sound on releases like ‘Pick You Up’ and ‘As I Sleep’ (which amassed over 15 million views on YouTube and Spotify alone), sits alongside commercial success such as his version of ‘Fast Car’ ft River, which went double platinum in Australia. Tobtok will be joined behind the decks by Perfect Havoc label boss, Adam Griffin. The duo recently stepped into the studio giving Adam his debut outing as a producer. ‘The Sting’ received key support from Annie Nightingale, Idris Elba and Todd Edwards, and was quickly followed by the Austin Kramer selected ‘The Stand Off’. Expect plenty of tried and tested bangers from this pair at Perfect Havoc.

Perfect Havoc also welcomes guest DJs Josh Parkinson and Pablo Bravas to the 100 Million Streams celebration. The latter is the new project from Adam Engle known as one half of chart-topping duo Blonde and founder of Night Beast Records, and the former as MC and DJ on London’s longest running house music station, Select FM.

Norwegian producer / DJ, Simon Fields will also appear. His Perfect Havoc release ‘Shake The Tree’ has been streamed over 3 million times and he’s remixed numerous legends, including Erick Morillo, Nina Simone and Kelis. Fields is also a tastemaker with over 292,000 followers for his Ibiza 2019 playlist on Spotify and Apple Music. Quality tune selection is guaranteed when he makes his Perfect Havoc debut.

Completing the lineup is one-to-watch talent, KALM. From bursting onto the radar in 2017 with his enormous remix of Sia’s ‘The Greatest’ that exploded virally online, to his latest release 'Learning How To Love (feat. River)’ in April 2019 (which gained support from BBC Radio 1's Mistajam as a self-certified Future Anthem and in Apple Music's DanceXL playlist), KALM has been defined as one of the most exciting talents to emerge from the UK.

The soundtrack to this event will reflect the success of Perfect Havoc, but this is also a party for the cool and colourful to let loose and dance on an intimate rooftop in Dalston. Tickets are on sale from just £15 plus booking fee – follow this link to buy: http://bit.ly/ph100party.

For those not lucky enough to be London, check out Mr Revillz’ YouTube channel post-event for a full stream of all sets on the night: www.youtube.com/user/MrRevillz.

How You Can Use Your Home To Help the Homeless
Sign up for offers
Sign up for what's on guide
Popular Categories
By clicking 'ACCEPT', you agree to the storing of cookies on your device to enhance site navigation, analyse site usage, and assist in our marketing efforts.
For more information on how we use cookies, please see our Cookie Policy.