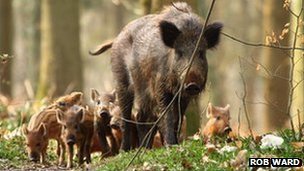 A wild boar cull in the Forest of Dean has been suspended until September, the Forestry Commission has confirmed.

Concerns about low boar numbers led the commission to suspend its plans to allow the district council to review the cull target.

Ian Harvey, from the commission, said people were concerned the boar "were going to be eradicated".

The Forestry Commission said the first statistically-reliable census of boar in the Forest of Dean began last year.

At its launch in November, the commission estimated there were up to 350 boar in the forest.

Campaigners from the Friends of the Boar group believe this figure is too high.

Rob Ward, from the group, said: "This has been my main focus in life for a very long time now and I am ecstatic that these animals can now breed and live without the stress of being hunted."

Councillor Terry Hale, from Forest of Dean District Council, said a public consultation had been proposed to look at issues surrounding the boar.

He added: "However, it must be noted that as a council we provide a view to the Forestry Commission on this issue - not guidance."

I have recently purchased the best of the Forest of Dean and Chepstow from the previous owners Paul and Sharon James. I look forward to meeting as many of you as possible over the coming months and assure...

BOOST FOR ROSS-ON-WYE LINKED TO 290 NEW GARDEN VILLAGE HOMES
Sign up for offers
Sign up for what's on guide
Popular Categories
By clicking 'ACCEPT', you agree to the storing of cookies on your device to enhance site navigation, analyse site usage, and assist in our marketing efforts.
For more information on how we use cookies, please see our Cookie Policy.