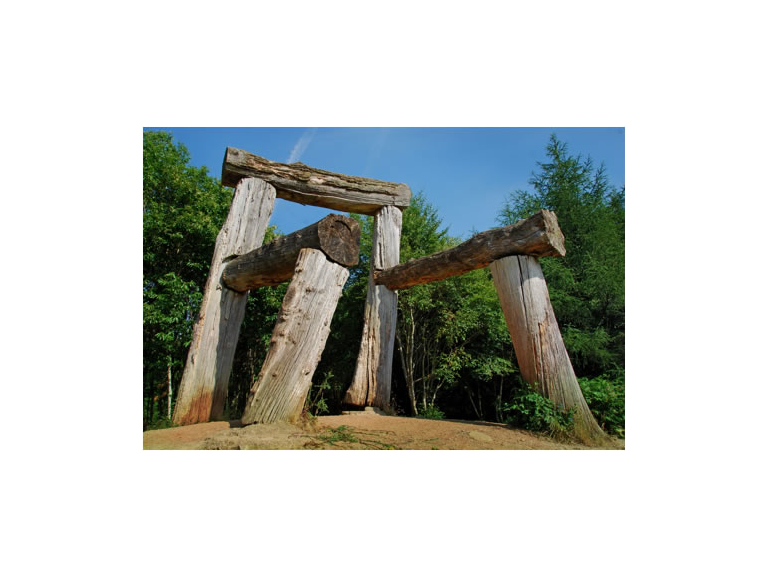 Installed some 29 years ago, the Giant's Chair is one of 16 installations throughout the 8km Forest of Dean Sculpture Trail and commands a magnificent view of the Cannop Valley. The structure is placed like a huge throne, or sits like a giant surveying his territory. With its irregular stance it is also reminiscent of a strange animal in one of Grimm’s Fairy Tales, striding across the landscape.

The chair, which was crafted out of local wood by Magdalena Jetelova in 1986, was only intended to stay for a year. However, it proved so popular that the sculpture was left on permanent display. Sadly, it is no longer stable and once the bats which are roosting in its legs have been re-homed, the chair will be removed and its remains will be recycled into new artworks.

The Forest of Dean Sculpture Trust and The Forestry Commission have worked in partnership for the last 29 years to create this vital Sculpture Trail that enjoys visitors of over 300,000 people per year.  They rely on donations and fundraising to commission new works for the trail.

The Forest of Dean Sculpture Trail was established in 1986, thanks in large part to the shared vision of Martin Orrom, then Forestry and Environment Officer for the Forestry Commission, Jeremy Rees, the founding director of the Arnolfini gallery in Bristol and Rupert Martin, Curator at the Arnolfini. The original commissions, collectively titled Stand and Stare, came out of the land art movement, in which landscape and the works of art were seen as inextricably connected. Amongst the first group of artists to install works on the trail were David Nash, Magdalena Jetelova, Ian Hamilton Finlay and Cornelia Parker.

The brief given to the artists was very clear - that the works should respond intellectually, historically, physically and conceptually to the particularity of place. The artworks you see on the trail were not simply placed there, but developed and inspired by the place – from its history and its material qualities.

The works were deliberately discrete in the woodland. The idea being that visitors would have to seek them out or come across them by chance. However, their popularity demanded footpaths and signposting. The Forest is not an art gallery but it is a location, a place, an environment, a dwelling place for flora and fauna and a site for leisure activity. The intention is that the sculptures and the environment are of equal value and do not compete for attention.

The Forest of Dean has a fascinating history and the immediate impression of rural idyll and romantic landscape belies the historical tensions between industrial and sylvan, man-made and natural, utopian and dystopian, settlements and forest, all of which have shaped this unique environment. As such it presents a rich source of inspiration – not only for artists – but for everyone.

The Forest of Dean Sculpture Trust was set up to oversee the maintenance of the trail and to commission new works – both permanent and temporary. The Trust has sought to stay true to the vision of its founders, whilst reflecting current movements in sculpture.

You will not find labels and information on the route, but instead are encouraged to investigate the sculptures in your own way.

Find out more about the Forest of Dean Sculpture Trail here http://www.forestofdean-sculpture.org.uk/

BOOST FOR ROSS-ON-WYE LINKED TO 290 NEW GARDEN VILLAGE HOMES
Sign up for offers
Sign up for what's on guide
Popular Categories
By clicking 'ACCEPT', you agree to the storing of cookies on your device to enhance site navigation, analyse site usage, and assist in our marketing efforts.
For more information on how we use cookies, please see our Cookie Policy.