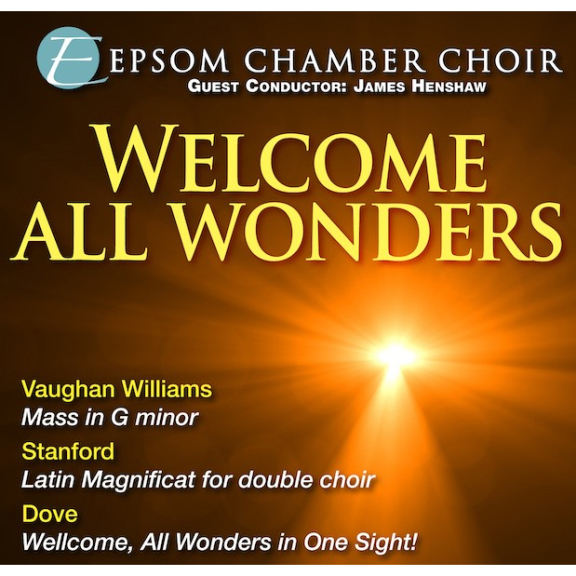 Inspiring the title of Epsom Chamber Choir’s spring concert is music by contemporary British composer Jonathan Dove. However, it isn’t the only work expressing spiritual wonder: included on the bill are Vaughan Williams’ Mass in G minor, Stanford’s Latin Magnificat and John Tavener’s ‘Hymn to the Mother of God’.

James Henshaw returns as guest conductor for this spring concert in which the choir draws on the rich vein of English choral music. Anthems by Byrd and Tallis from five centuries ago are contrasted with works from both the early and late twentieth-century. A piece by another fine 20th century choral composer, Gerald Finzi, is also being performed but this time not by the choir but by clarinet and piano – his wonderfully rhapsodic ‘Bagatelles’.

Vaughan Williams’ Mass in G minor is perhaps the best known of the evening’s music. Although intended to be sung as part of a church service, it was premiered in a concert hall in 1922. It showed how Vaughan Williams could expertly blend his own idiosyncratic musical idiom with imitative modal lines of the past. Completed in 1918 just before the end of the First World War, Stanford dedicated his Latin Magnificat to Hubert Parry.  The work is full of exuberance and spirit, taking inspiration from Bach’s own ‘Magnificat’.

Jonathan Dove is renowned for his writing for the voice, whether for opera stage or cathedral. This short anthem ‘Wellcome, All Wonders in one Sight!’ shows the composer’s typically imaginative choices of texts with words by the 17th priest and metaphysical poet Richard Crashaw. Dove’s sparkling lyrical lines express the wonder of the shepherds as they visit the manger. 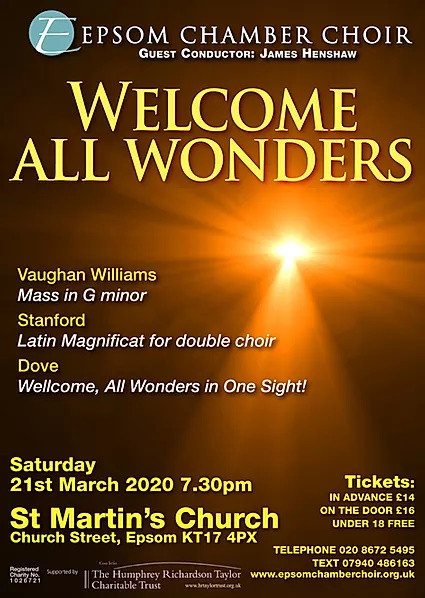