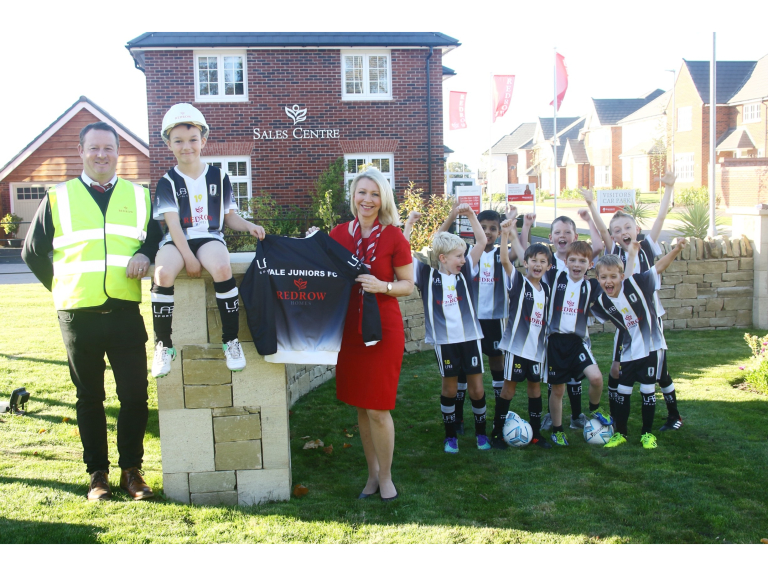 CONGLETON’S Vale Juniors Bears Under Nines are sporting new kits thanks to sponsorship from Redrow.

The club has a solid reputation for youth football, with hundreds of children and teenagers playing in teams from under sevens to under 18s.

This year there are two squads for under nines and Redrow has offered them home town support, funding kits for one squad and hoodies for both.

Vale Juniors Bears Under Nines are managed by Redrow site manager Mark Hitchen, whose son Zachari plays for the team.

Mark said: “It’s the squad’s first season playing together and my first season as a manager. Most of the teams they have games against have been playing football since they were five, which is an advantage, but having the Redrow sponsored kits is helping the players bond as a team. All of the players are really enthusiastic and while it’s a new team they have been exceeding expectations and you can see improvement in them every week.”

Mark, who’s from Congleton, received a Pride in the Job award from the National House Building Council (NHBC) in 2016 as well as numerous health and safety awards for his work on other Redrow developments.

“Managing young footballers and overseeing the team on site constructing new homes are surprisingly similar as you’re trying to bring the best out of different personalities,” Mark added.

Cranberry Gardens offers a choice of two to four-bedroom homes from Redrow’s Heritage Collection. Show homes at the development are open daily. For more information call 01260 241 520 or see www.redrow.co.uk/cranberrygardens.

Issued for & on behalf of Redrow Homes (NW) by Active PR. Press information from Rachael Bruce

MAKE THE MOST OF THE SUNSHINE AT CRANBERRY GARDENS