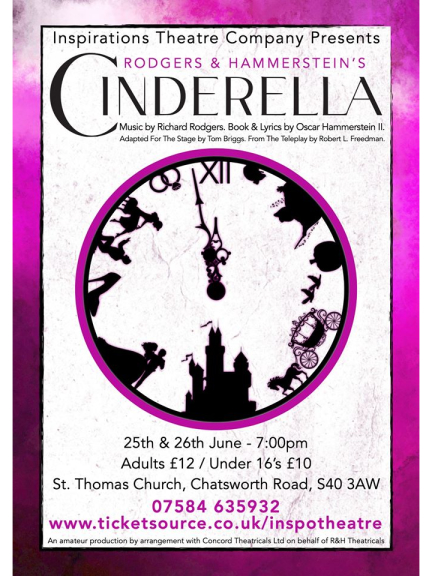 Based upon the French version of this fairy tale, Rodgers and Hammerstein's adaptation of Cinderella brings new life to the classic story.

Based upon the French version of this classic fairy tale, Rodgers and Hammerstein's adaptation of Cinderella brings new life to the story of a young woman forced into servitude who dreams of - and achieves - a better life. This enchanting adaptation of the timeless fairytale was originally written for a special telelviosn broadcast which aired in 1957. Starring Julie Andrews in the title role, it was th most widely viewed program in television history and was watched cry over 60% of the entire populations of th USA, globally reaching 100 million viewers.

Music By: Richard Rodgers
Book & Lyrics By: Oscar Hammerstein II
Adapted For The Stage By: Tom Briggs.
From The Teleplay By: Robert L. Freedman.
An Amateur Production By Arrangement With Concord Theatricals Ltd On Behalf Of R&H Theatricals.