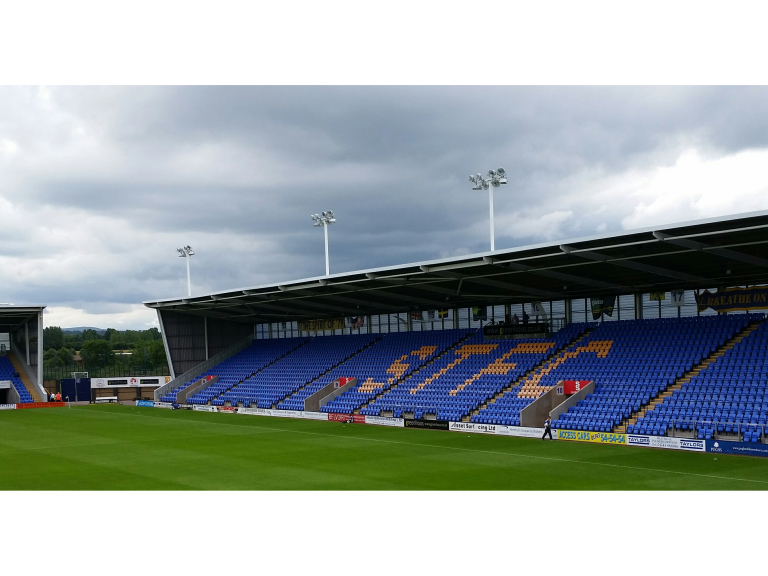 Chesterfield failed to get on the scoresheet in this contest and ultimately fell to a 2-0 defeat at Greenhous Meadow. James Collins put the Shrews in front mid-way through the first-half and Craig Durran doubled the advantage in the opening stages of the second period.

Following an end-to-end start to proceedings, Eoin Doyle aimed to take the initiative with a speculative effort from distance that sailed high and wide of the crossbar. The hosts’ Scott Vernon squandered a glorious heading opportunity after the striker met a driven corner-kick from James Caton.

Dan Gardner showed real intent with a low and powerful drive from range which just went wide of the post. Confusion between several members of the Shrewsbury defence left Gary Roberts with a chance to open the scoring from an awkward angle, but the winger’s header crashed against the crossbar and away from danger.

With 37 minutes on the clock, the home side took the lead through Collins’s looping header that evaded Luke Williams in the Chesterfield goal. On the stroke of half-time, Jimmy Ryan took matters into his own hands with a low effort from the edge of the area which just skipped wide of Jayson Leutwiler’s post.

Immediately after the re-start, Tendayi Darikwa met short free-kick from Roberts before releasing a curled effort that never troubled Leutwiler. Only ten minutes had been played in the second period before Shrewsbury doubled their advantage, as Durran latched onto a lofted corner-kick to direct the ball past Williams from close range.

Armand Gnanduillet almost pulled a goal back for Chesterfield with a powerful header of his own, only to be denied by a magnificent clearance off the line by a member of the hosts’ defence. Durran could have added his second and Shrewsbury’s third goal of the afternoon in the latter stages of normal time, but the midfielder’s glancing header was always rising.

A weaving run inside the box culminated in a tame shot from Adam Morgan which was held comfortably by Leutwiler, summing up a frustrating afternoon in Shropshire for the Spireites. The final chance of the game fell to the hosts’ Andy Robinson, whose low effort trickled wide of the post.