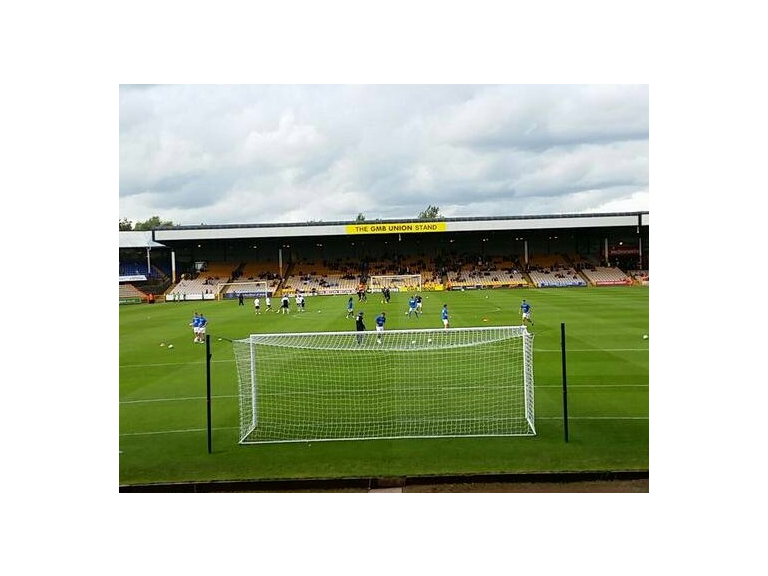 Eoin Doyle and Gary Roberts both netted either side of a Mark Marshall volley to claim a 2-1 victory at Vale Park on Saturday afternoon, despite been reduced to ten men following Ian Evatt’s second-half dismissal.

Unsavoury scenes and allegations of racism from certain members of the Port Vale crowd after the full-time whistle marred what was a deserved three points for the Spireites.

The first chance in this contest fell to Port Vale’s Marshall, whose header was held comfortably by Chesterfield goalkeeper Tommy Lee following a driven corner-kick from Chris Lines. With just nine minutes on the clock, the Spireites took the lead after Roberts’s curled effort deflected against the post and into Doyle’s path who finished calmly passed the hosts’ goalkeeper Sam Johnson.

Pressing forward in search of an immediate equaliser, the home side went close with a volley from former Hibernian defender Ryan McGivern which just evaded the crossbar from an awkward angle. Tom Pope thought he’d levelled the scoreline with a ferocious drive from just inside the area, although the former Rotherham striker was denied by the post.

Armand Gnanduillet drove forward with intent at the home side’s defence before unleashing a tame attempt at goal that landed easily into the palms of Johnson. On 41 minutes, the Valiants got back on level terms courtesy of Marshall’s superb strike from the right-hand side which Lee failed to deal with at his near-post.

Just one minute after the half-time break, Roberts restored Chesterfield’s lead following a magnificent weaving run down the right-hand side which culminated in a low finish past Johnson that cannoned against the post and into the back of the net. Appeals for a penalty on the Spireites’ behalf were then turned down by the referee, with Gnanduillet receiving a yellow card as a consequence of simulation.

Mid-way through the second period, Doyle fired a dipping cross to Gnanduillet whose scissor-kick was headed magnificently off the line by McGivern. Monents later, Byron Moore capitalised on a defensive lapse to finish past a flailing Lee from close range although the linesman’s flag was already raised for off-side.

On 84 minutes, Chesterfield were reduced to ten men following Evatt’s second yellow card of the afternoon for a cynical challenge on a member of the Valiants’ attack. Despite intense Port Vale pressure in the closing stages, the Spireites got themselves over the line to claim three points after five lengthy minutes of additional time.