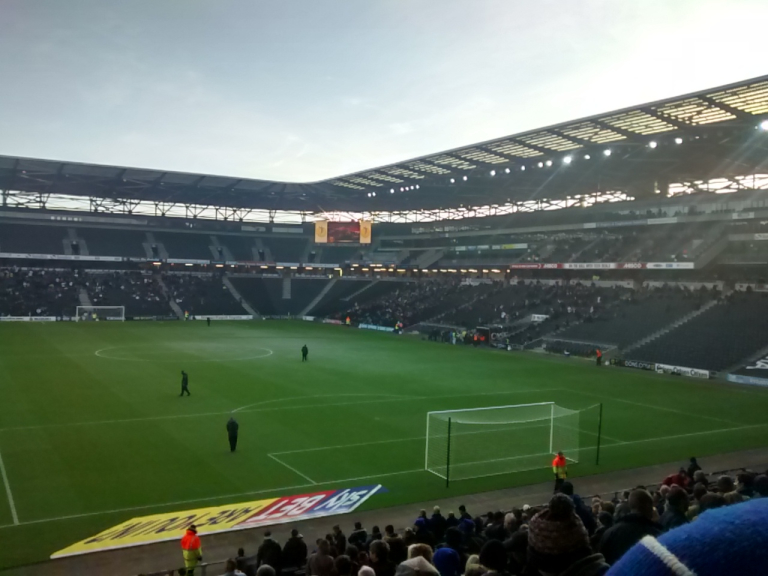 Chesterfield advanced to the third round of this year’s FA Cup with a 1-0 victory at stadiummk on Saturday afternoon, which came courtesy of a second-half header from Armand Gnanduillet.

Spireites boss Paul Cook made two alterations from last Saturday’s win at Crawley, both of which were enforced as the injured Ian Evatt and the suspended Daniel Jones were replaced by both Georg Margreitter and Gnanduillet.

The first real opportunity in this contest fell to the feet of Gnanduillet, as the striker went one-on-one with the hosts’ goalkeeper David Martin before delaying his decision to shoot and ultimately giving up possession. Gary Roberts advanced further up the field prior to directing a lofted pass from the left-hand side into the side-netting.

With Tommy Lee stranded on his own 18-yard line, Dele Alli looked odds-on to net an opener for the Dons, but he placed the ball high and wide of the crossbar. Next to trouble the Spireites’ defence was former Coventry City midfielder Carl Baker, after cutting inside onto his stronger foot and forcing Lee into a magnificent diving save.

End-to-end would be an ideal way to describe the first period, although on this occasion Jimmy Ryan crossed waywardly into the stands and Martin readied himself for a goal-kick. On the counter-attack, Tendayi Darikwa nipped in to lift the ball onto the roof of the net following confusion amongst the home side’s backline.

On the stroke of half-time, Gnanduillet rose highest to meet yet another lofted pass into the area, only to head disappointingly wide of the post on the six-yard line.

Just after the break, neat link-up play between Jay O’Shea and Gnanduillet culminated in a powerful strike from the former that sailed wide of the post. With 53 minutes on the clock, the Spireites took the lead courtesy of a downward Gnanduillet header following a driven Sam Clucas cross from the left-hand side that sent the vast travelling support into delirium.

Only four minutes had passed before Chesterfield had the ball in the back of the net for a second time, although Eoin Doyle’s finish from close range was ruled out by an off-side flag. Baker picked up possession inside the visitors’ half of the field and drove forward, then released a shot but Darikwa was primed and ready to stop it in its path towards goal.

Suddenly, Doyle went to ground just inside the hosts’ penalty area with no decision forthcoming as the referee signalled play to continue. In the closing stages, Sam Morsy attempted a speculative effort from range that was held with relative ease by Martin.

In time added on, there was an initial four minutes signalled but Ryan picked up an injury after a forceful challenge from Alli which ultimately caused a delay. In the end, there’d been eight minutes played although the home side failed to prevent Chesterfield’s passage through to the third round of this year’s FA Cup.