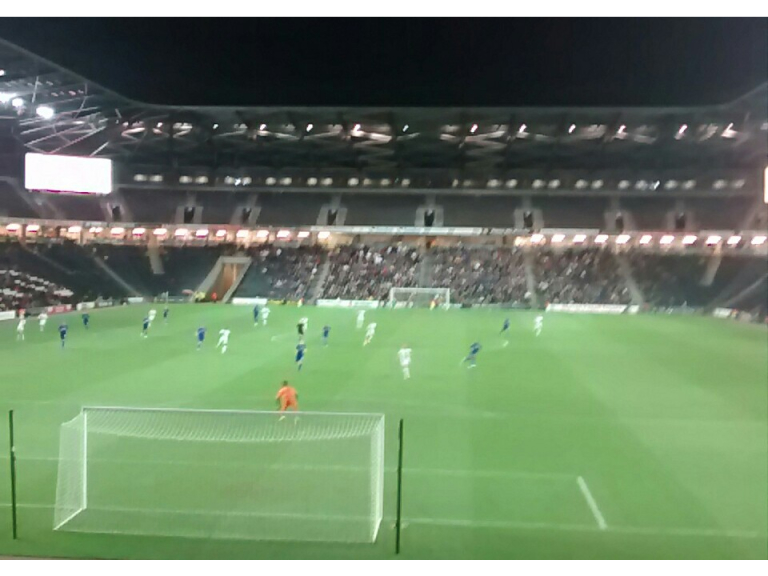 Chesterfield put in a repeat performance last night at stadummk to claim a 1-0 victory in the replay of their tie in the second round of this year’s FA Cup against Milton Keynes Dons. Gary Roberts converted the only goal of the game in the first-half, from the short distance of six yards.

Spireites boss Paul Cook made just one change from Sunday’s draw against Coventry City, with Sam Morsy coming back into the side in place of the injured Ian Evatt following the culmination of the midfielder's three-match ban.

Just seven minutes had passed before Armand Gnanduillet had the ball in the back of David Martin’s net, although the Ivorian’s towering header was disallowed within seconds by an off-side flag. Given the time and space that any striker craves, Arsenal loanee Benik Afobe advanced unchallenged before eventually shooting straight into the palms of a resolute Tommy Lee.

Appeals for a penalty in the 12th minute on the home side’s behalf were waved away by the referee, as Danny Green went down under a soft tackle from a member of the defence. Former Spireite Mark Randall tried his luck with an ambitious half-volley from 20 yards, but all Lee was required to do was watch the ball sail high and wide of the crossbar.

Afobe took matters into his own hands once again with an individual run towards the area, passed his marker with ease and disappointed the home support with a forceful effort that struck the side-netting. Only two minutes were left to play in the first period when Cook’s men took the lead, courtesy of a simple finish from Roberts on the six-yard line following an irresistible diagonal pass from Irish talisman Eoin Doyle.

After the break, Green launched a driven cross towards the head of Dean Bowditch who failed to make an adequate connection which prompted Lee to ready himself for a goal-kick. Next to come up short with a headed attempt was Gnanduillet, as Tendayi Darikwa’s wayward cross was always rising which only allowed the striker to get a meaningless touch.

Captaining the side in place of the injured Evatt, Morsy found himself in the referee’s notebook on 57 minutes as a result of an unavoidable collision with a member of the hosts’ midfield. Running away from goal, Gnanduillet decided to shoot from an awkward angle and failed to force a meaningful save from Martin when he could have looked for options elsewhere.

The closest the home side came to levelling the scoreline was a Bowditch free-kick taken from roughly 25 yards, it was a ferocious strike but straight in the direction of Lee who planted his feet and got both palms behind it to prevent any kind of threat. With the four minutes of additional time all but over, Dean Lewington failed with a through-ball and watched it bounce out of play before resigning himself and his side to a deserved defeat in the second round of this year’s FA Cup.