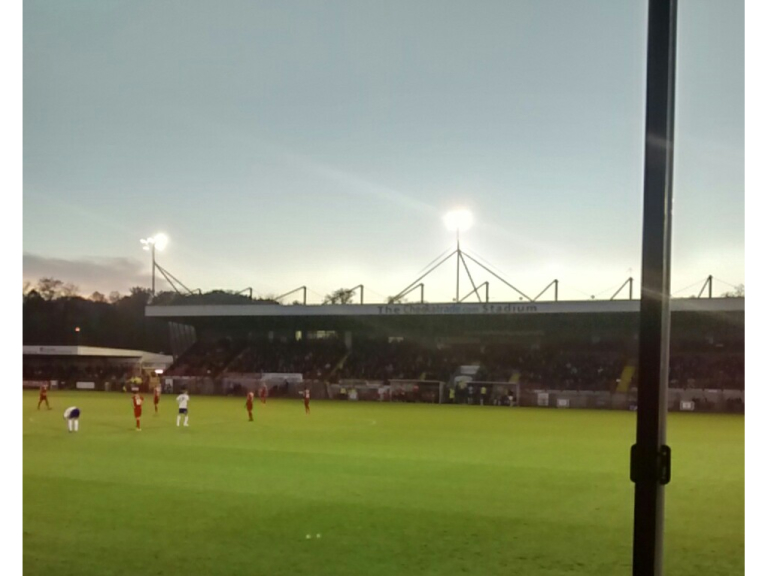 Spireites Settle for a Point at Crawley.

Chesterfield took a share of the points on Saturday afternoon with a 1-1 draw at Broadfield Stadium, after Gary Roberts opened the scoring in the second period before Gavin Tomlin netted the all-important leveller. Both Daniel Jones and Izale McLeod were dismissed in the closing stages, following an unsavoury and ultimately unnecessary altercation near the touchline.

In the opening moments, Eoin Doyle found himself in acres of space on the left-hand side and fired a shot across the face of goal that was cleared to safety by a member of the home side’s defence. Roberts was the prime target for a lofted Sam Morsy through-ball, but the enigmatic winger failed to bring the ball under control on this occasion.

Arguably one of the best opportunities in the first period fell to the home side’s Jimmy Smith, as the midfielder broke free of the defence and struck the crossbar with immense force from the edge of the area. Two strong challenges followed, one from Tendayi Darikwa and latterly Crawley’s Smith, with both players receiving a yellow card as a result.

Suddenly, the Spireites had three quick-fire attempts blocked on the line by opposing defenders, with Jay O’Shea, Sam Clucas and Roberts going close with forceful efforts. On the stroke of the half-time whistle, Morsy was a whisker away from giving Chesterfield the lead but once again, the Red Devils stopped the ball in its path towards goal with an absolutely pivotal block on the six-yard line.

Immediately after the break, Tomlin tested the reactions of Tommy Lee with a stern drive from the edge of the area, but the goalkeeper was equal to it. Just before the hour mark, Chesterfield went in front through a moment of individual brilliance as Roberts evaded his marker and cut inside prior to placing the ball low and hard past a flailing Lewis Price.

Only 12 minutes had passed before Crawley levelled the scoreline, courtesy of Tomlin’s impressive chip over a stranded Lee eight yards away from the comfort of his line. Roberts then went unchallenged as he advanced towards the area before stabbing the ball straight in the direction of Price who pushed the ball behind for a corner-kick.

With just seconds of normal time left to play, the most controversial incident of the afternoon occurred between Chesterfield’s Jones and the home side’s McLeod. An unnecessary reaction from the pair prompted the referee to send both players for an early bath, even though it had no impact on the overall result of this contest.