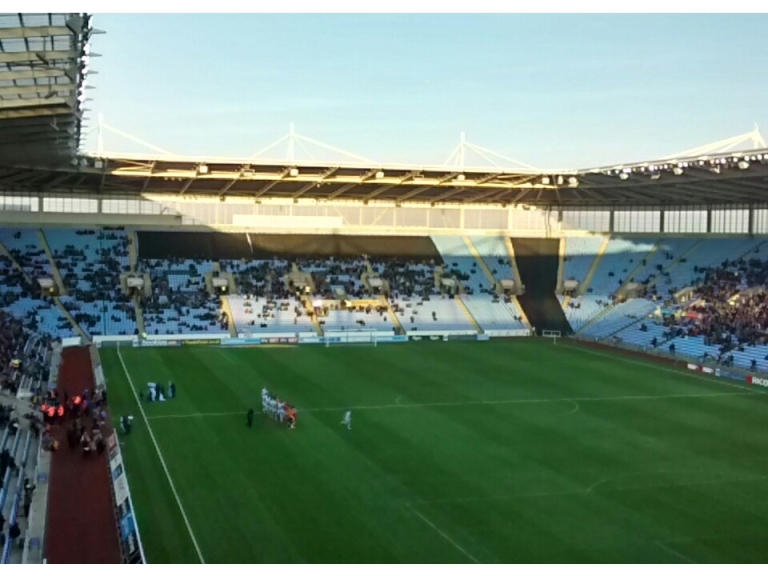 In Chesterfield’s final contest of 2014, the points were shared after a 0-0 draw against Coventry City at the Ricoh Arena yesterday afternoon. No doubt, a fair result which earned the Spireites their seventh point from an available nine over the festive period.

The first real chance in this contest fell to the feet of Simeon Jackson, who broke free of the defence and forced a save from Tommy Lee with a forceful shot from an extremely awkward angle. Gary Roberts aimed a through-ball at Armand Gnanduillet, but the pass came with too much power and Ryan Allsop advanced in order to easily gather possession.

Cutting inside onto his stronger foot, Frank Nouble eventually released a shot that was stopped in its path towards goal by the leg of a confident Charlie Raglan. After evading his marker on the edge of the area, Roberts thought he’d get in on the act with a hopeful attempt that never worried Allsop in the slightest.

Without any doubt, the most controversial incident in the whole game occurred with 36 minutes on the clock, as Nouble went to ground following a late challenge from a recovering Raglan. Initially, the referee awarded a penalty but within moments was over-ruled by the linesman who judged the tackle to have took place just outside the area.

Immediately after the half-time break, Sam Clucas delivered a cross towards Romuald Boco who gladly took the opportunity to strike and dragged the ball low and dismally wide of the post. The home side’s Jackson then showed an immense amount of quality to beat his marker and unleash a curled effort that Lee watched warily as it sailed past the post.

Outlining his importance to this particular Spireites’ defence, Raglan reacted quickest to clear the ball before it trickled over the line following a scramble in the danger area. Gary Madine, on loan with the Sky Blues from Sheffield Wednesday, went one-on-one with Lee only to delay his decision to test the goalkeeper and ultimately give up possession to the ever-present Raglan.

A set-piece was the closest anybody came to scoring in the closing stages, as Madine struck the post with a free-kick from range. For the full four minutes of additional time, the game continued in the same vein as the latter stages of the second period with no clear-cut opportunities created up until the full-time whistle.