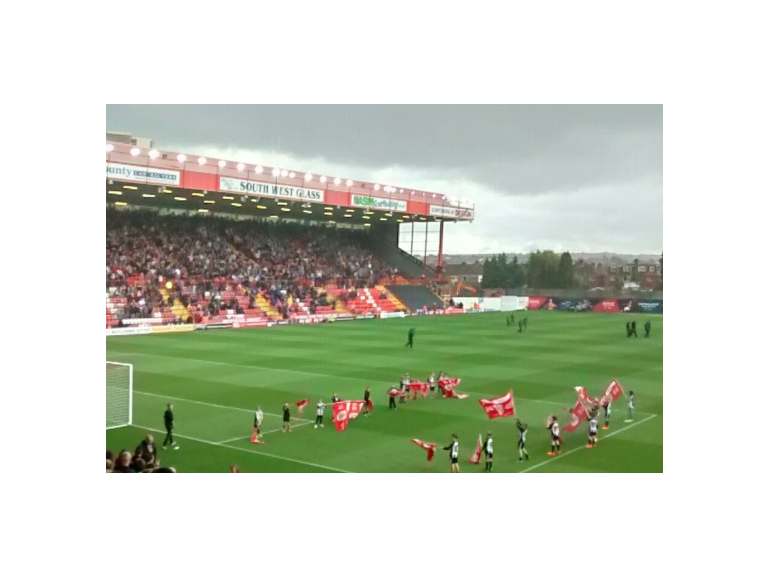 League leaders Bristol City recorded a 3-2 win over the Spireites on Saturday afternoon courtesy of an Ian Evatt own-goal, a Derrick Williams header and a last-minute winner from Wes Burns. Eoin Doyle masterminded Chesterfield’s two strikes with a penalty-kick and a close range finish, although it wasn’t enough to prevent defeat for his side.

Only nine minutes had been played before the home side took the lead after Evatt turned a low cross from the left-hand side into his own net past a helpless Tommy Lee. Mark Little fired a driven cross into the area which in the end was met by Wade Elliott, who ultimately failed to get the required connection and directed the ball wide of the target.

Luke Freeman’s forceful strike was palmed impressively away from danger by Lee, as Bristol City continued their positive start to the first period. Then, on 24 minutes the Spireites were awarded a penalty after Doyle was brought to ground inside the area.

The Irishman stepped up and sent Frank Fielding the wrong way to get his side back on level terms. With play back underway, Joe Bryan tried his luck with a curled attempt that sailed narrowly wide of the post.

Daniel Johnson attempted a speculative effort from 20 yards, but managed to balloon the ball high and wide of the target. On the stroke of the half-time whistle, Georg Margreitter’s towering header was cleared superbly off the line by a member of the hosts’ defence.

Immediately after the break, the home side went back in front courtesy of Williams’s headed effort past a diving Lee following the defender’s rise to meet a stunning corner-kick. Just eight minutes had passed before Chesterfield levelled the scoreline for a second time, as Doyle capitalised on a loose ball inside the six-yard box to scramble it home past a flailing Fielding.

The second 45 minutes began in a similar manner to the first, with the end-to-end nature of this contest typified by the two previous quick-fire goals for each side. Displaying immense talent, Freeman drove forward and lost his marker once again before unleashing a ferocious shot that just went wide of the post.

Aiming to replicate the magnificent strike against Sheffield United in the previous fixture, Jimmy Ryan set himself up to shoot before firing disappointingly into the stands. Ollie Banks had a deflected attempt parried by Fielding, as both sides continued to press forward in search of that all-important winning goal in the closing stages.

Deep in the four minutes of additional time, the home side grabbed the winner through a simple tap-in from Burns following an absolutely incredible delivery from the right-hand side that split the Chesterfield defence in half and ultimately confined the Derbyshire side to defeat.