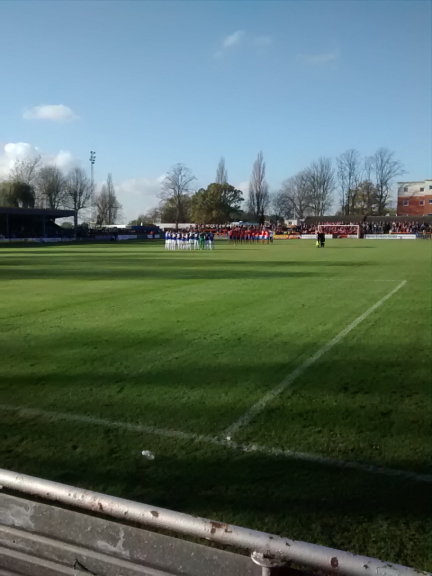 Spireites Cruise to Victory Against Braintree.

Chesterfield cruised to a 6-0 victory against Braintree Town at Cressing Road on Sunday afternoon, which ultimately booked their place in the second round of this year’s FA Cup. Eoin Doyle grabbed a brace and individual goals from Jay O’Shea, Sam Clucas and Gary Roberts sealed a comfortable victory. Adding insult to injury for the non-league hosts, one of the six conceded was awarded as a Ryan Peters own-goal.

In the opening moments, Sean Marks connected with a corner-kick for the home side before directing the ball low and wide of the post. Simeon Akinola received the ball on the edge of the area and fired high and wide of the target, as part of an eventful start to this contest.

With 19 minutes on the clock, Chesterfield opened the scoring through a low Clucas cross that allowed Doyle to finish into an open net from a matter of yards. Only nine minutes had passed before the Spireites doubled their advantage, courtesy of a moment of brilliance from O’Shea as the midfielder’s curled effort from range beat Nick Hamann all-ends-up.

Sam Morsy tried to emulate his team-mate with a strike from distance, but failed to test the goalkeeper who readied himself for a goal-kick. On the stroke of half-time, Cook's men netted a third through another easy finish, this time from Clucas on the six-yard line following a low Tendayi Darikwa cross.

Immediately after the break, Tommy Lee came rushing off his line prior to bringing down an opposing forward and was extremely fortunate to avoid a yellow card. On 51 minutes, the home side conceded a fourth as Roberts produced a perfectly placed half-volley that Hamann was powerless to stop as the ball nestled into the top left-hand corner of the net.

An extremely rare moment in the second period, Akinola forced an opportunity with a powerful strike from an awkward angle that was palmed away to safety by Lee. With just 18 minutes of normal time left to play, the Spireites scored a fifth courtesy of a Peters own-goal after the defender deflected a low cross from Daniel Jones passed Hamann and into his own net.

Another disallowed goal came nine minutes before the end, with Clucas denied by the linesman on this particular occasion after rifling past Hamann from close range. Deep into the three minutes of additional time, Doyle capitalised on a neat through-ball and finished past a stranded Hamann from 20 yards to cap off a faultless display.