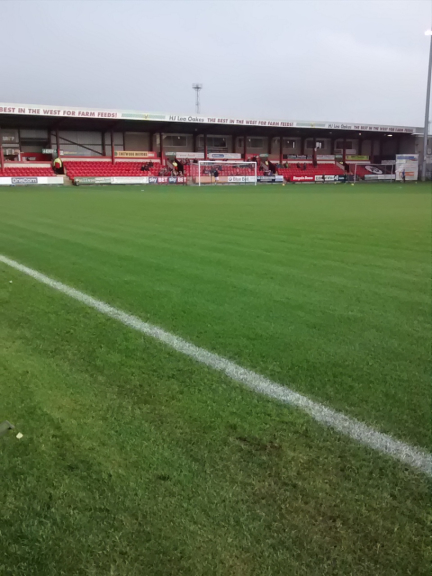 Both Crewe and Chesterfield took a share of the points following a 0-0 draw at Gresty Road on Saturday afternoon.

The first real chance in this contest fell to the feet of Sam Clucas, whose first touch let him down after a magnificent chipped pass from Gary Roberts. Jay O’Shea found himself in an ideal position to finish from around six yards, but somehow the midfielder managed to drag his shot low and disappointingly wide of Ben Garratt’s post.

After finding space just outside the area, Jimmy Ryan shaped to shoot before forcing Garratt into an extremely impressive diving save. The Spireites started the first period in a very bright and energetic manner, with Ian Evatt next to test Garratt with a forceful header following a driven corner-kick from Roberts.

Just before the half-time whistle, Sam Morsy received his fifth yellow card of the season as a result of a strong tackle on Bradden Inman.

Immediately after the break, Febian Brandy met Inman’s cross and found himself in a glorious position to shoot before Evatt came sliding in to make an important interception. With 53 minutes on the clock, Roberts thought he’d given Chesterfield an early second-half lead with a curled finish from an awkward angle, before realising it wouldn’t count due to an off-side flag.

Showing a high level of attacking intent throughout, Brandy’s weaving run culminated in a tame effort that went wide of the post on this particular occasion. A lofted free-kick from Roberts then found the head of Charlie Raglan, whose attempt lacked any kind of conviction and a member of the opposing defence made a simple clearance.

With around five minutes of normal time left to play, Greg Leigh tested the reactions of Lee from an awkward angle but the goalkeeper stood firm. For the full three minutes of additional time, neither side created any meaningful opportunities and ultimately settled for a point.