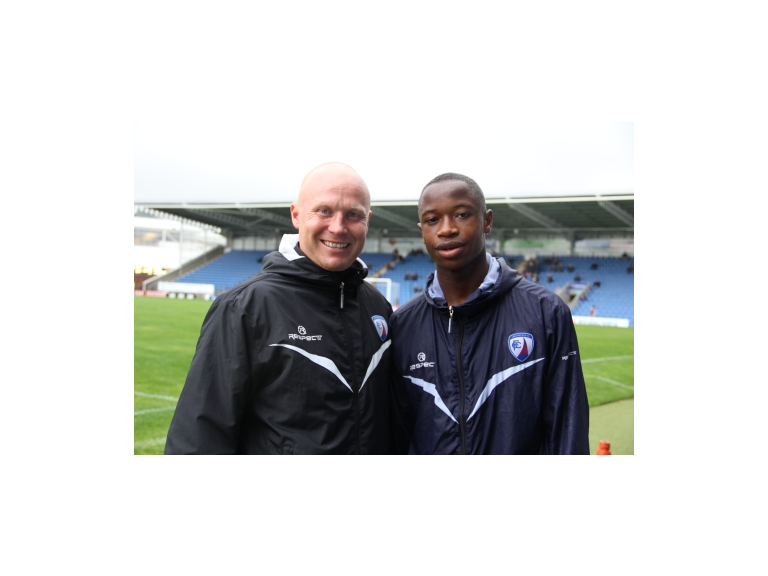 Chesterfield College student, Jonathan Wafula from Alfreton, has the perfect reason to celebrate National Colleges Week as he's gained a place in the Chesterfield FC reserve team following his hard work for the College's Football Academy.

Jonathan, who is studying for a Level 3 Sports and Exercise Science qualification alongside a City and Guilds qualification in working with athletes with disabilities and a Community Sports Leaders Award, came on as a substitute in Chesterfield FC's last reserve game against Newcastle United. The match ended in a 1-1 draw.

In addition to their studies, the Football Academy at Chesterfield College serves to give both male and female students regular games of football alongside high levels of fitness training. It then looks to place the students into the game through strong links with local football sides.

Dave Bentley, Head of Youth at Chesterfield FC says, 'After being in the Football Academy for just one year Jonathan Wafula has moved on very quickly with his football. He is now a regular member of the Chesterfield Youth team playing in the Youth Alliance North and East Region. His performances have also been recognized with him making a couple of appearances for the reserve team as well. Jonathan continues his studies and trains when he can. This can only help other students realize that opportunities are there for them to make the step up. Our relationship with Chesterfield College continues to grow and a big thank you to College Sports Lecturer, Neil Cluxton who heads up the Academy for all the help he provides.'

Neil Cluxton adds, 'Jonathan has worked extremely hard over the last 12 months as part of the Academy to improve all aspects of his game and thoroughly deserves this opportunity at Chesterfield FC. He has also had tremendous support from the Sports Lecturing staff within the Department who have worked with him on the Btec Academic Programme.'

Jonathan concludes, 'I've really enjoyed my time at College as it's allowed me to study whilst indulging my passion for football. I'm going to keep working as hard as I can to gain my qualifications and hopefully I will impress the staff at Chesterfield FC.'

Anybody looking to join either the male or female Football in Education Academy can visit Chesterfield College's Clowne campus on Wednesday 28 September, between 9.30am and 4pm to meet with Neil Cluxton. Alternatively, to find out more information call Neil on 07765972348.