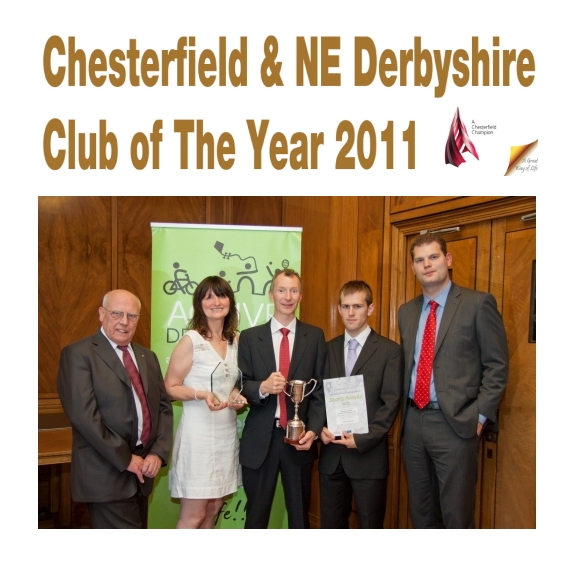 Brampton Manor Squash & Racketball Club in Chesterfield has scooped 2 awards at the Chesterfield & NED Sports Awards 2011. The awards are a way of recognising and celebrating the sporting successes of athletes and those involved in sport at all levels.

The club was honoured with the title of "Sports Club Of The Year", while the clubs top young player, 17 year old Ashley Davies from Brookfield Community School was the winner of the "Junior Sportsman of The Year". This tops a fantastic year for Ashley & the club.

Ashley finished the season as England U17 no. 2, & has won numerous tournaments including the recent U17 Nordic Junior Squash Open, he also captained  East Midlands U17  team - National Champions & Derbyshire U17 team - National runners-Up. He is being mentored by the current World & Commonwealth Champion & World no. 1 Nick Matthew from Sheffield.  England Squash & Racketball have selected Ashley for the World Junior Open Championship Preparation Squad for Cairo 2012.

“There are some exceptional sportsmen and sports women across North East Derbyshire so it’s great to be able to reward their hard work, dedication and talent through the Sports Awards.  I wish them all the very best with their future sporting careers.”

“These awards are about celebrating the wealth of sporting talent that we have across the area – every year we see a really high standard and this year has been no different, so well done to all the winners!”

Collecting the award at Chesterfield Town Hall on behalf of the club, was Jane Beresford Assistant Coach. Jason Fearn Head Coach & Phil Scully 1st team captain, Ashley was busy winning the U17 event at  the Nordic Junior Open in Sweden so could not attend the ceremony.

Sportsperson of the Year:   Liam Pitchford

Sportsperson of the Year:   Kim Bent

Coach of the Year:   Dave Cartawick