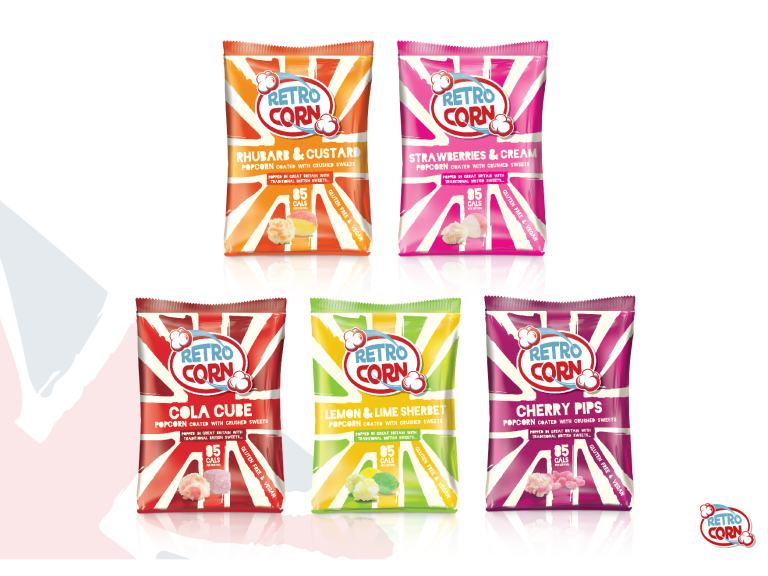 Greg, how did you come up with the idea for Retro Corn?

So, the idea came up around three years ago. I was sitting around the table with a group of friends having a few glasses of wine and dinner, as you do, and I said to them what do you think of putting cola cubes on popcorn? They all said well that’s a bit of a wacky idea. I asked to them all tell me the best flavours that they remembered as children.  I remember sitting there writing it down on a piece of paper. They were saying Rhubarb and custard, lime sherbets so I listed them down and the following day I was at the sweetshop buying quarters of different sweets.  I went home and tried various different ways of combining them with popcorn. Eventually I found a way of doing it and the rest is history. It all came from a drunken idea with friends.

So when did Retro Corn actually start?

3 years ago and it started off in my grandmother’s kitchen. I used to be Head of Hospitality for Aspers Casino in London and managed around 200 staff. I gave that all up just after the Olympics and decided to have a go at making the Retro Corn.

So how many outlets are you in now?

We are in a variety of smaller stores but our biggest customer is the Co-op and we are in about 100 of those. There are 40 of those in Essex and the rest along the east coast. We are looking to be in around 200 in the next few months. If that all goes well then we are looking to go into the Manchester group which has about 2000. Fingers crossed if we can prove ourselves locally the national will take it on.

Where is it produced?

It’s all made here in Witham, Essex in our factory. We are one of the only popcorn makers that manufacture their own product. It means that we can control the quality a lot better than other companies. When we do expand we will always stay in the Essex area as we feel this is our home.

Is there a best selling flavour and what are the other flavours you produce?

Rhubarb and custard is our best selling flavour closely followed by strawberries and cream. Cola cubes seem really popular in Essex, for some reason, so maybe that was a favourite for the people of Essex. Cherry pips, which is a new flavour we bought out about 6 months ago is now in the top 3. We also do Lemon and Lime Sherbet. We do have another 5 flavours waiting in the background to be developed. They are pear drop, pineapple cubes and more of the British traditional sweets that people remember as children growing up.

Can people suggest flavours to you?

Yes there is a section on our website to try to encourage people to suggest new flavours. Pear drops is one that was suggested by someone together with Dandelion and burdock .

For new products how do you ensure the taste is perfect?

Unfortunately my  grandmother passed away 6 months ago but she had a role as our chief taster. So every new flavour was vetted by Nan. The 5 flavours that are here were her favourites and were all vetted and approved by Nan before they went to shelf. Going forward there will be a local tasting panel and our staff will decide what new flavours are going to make it to the shelf.

If someone wanted to purchase some Retro Corn where is the best place for them to go?

The Co-op is the best place to go. You will see it with the big stand and a union flag on the side of it. You can also buy it on our website and at Butlins to name a few. We also export to Hong Kong and are in 137 supermarkets there. We are also talking with a licensed manufacturer in Bahrain.

What is the future for Retro Corn?

Really what opens doors for us is what we are doing differently. We actually use crushed sweets to flavour our popcorn so that’s why it tastes so authentic and brings back those memories of childhood. We are looking to produce larger bags of 120g which will be your sharing cinema bag. Also we are looking at doing a mixed bag with reseal able tabs at the front. We’ll also be looking to bring out a savoury range for pubs and similar places.

Retro Corn is another great example of a local up and coming business. Keep up the good work guys!

I run thebestofchelmsford and am passionate about helping the independent businesses in Chelmsford thrive and achieve their goals.

Would you like to represent Essex Dementia Care in this years charity Colour5K?
Sign up for offers
Sign up for what's on guide
Popular Categories
By clicking 'ACCEPT', you agree to the storing of cookies on your device to enhance site navigation, analyse site usage, and assist in our marketing efforts.
For more information on how we use cookies, please see our Cookie Policy.