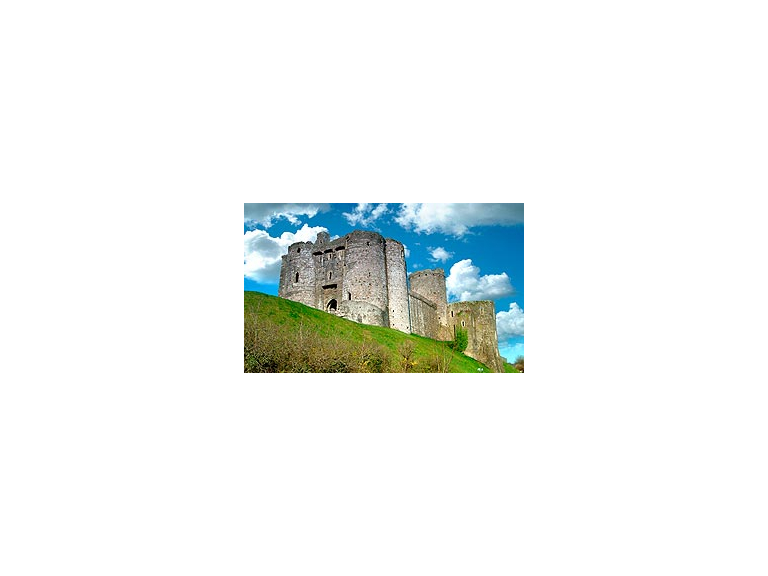 I have visited Kidwelly Castle many times, as I live in the neighbouring village of Pembrey, I went many times as a child with my parents and when uncles and aunts visited they always wanted to visit the castle.  I took my children many times and we had picnics there and spent many a sunny day enjoying the ambience.  We have even been to a medieval re- enactment where enthusiasts of all things medieval come together and re-enact some of the battles, they also carry on the trades that might have been used many years ago during the time the castle was in action, for instance a fletcher was there on one of our visits showing the children how arrows might have been made ready for battle and they very often had examples of the armour which would have been worn, it was great for the children to learn in this way rather than reading it from a book. 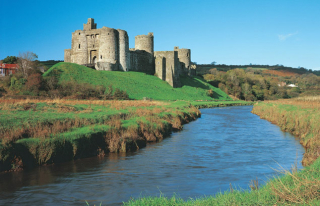 It is thought that the earliest castle built on the site was Norman and made of earth and timber round about 1115AD, the current castle was rebuilt in stone somewhere between 1200 and 1476 and was created as a defence against the Welsh.  It followed the original half-moon shape planned by the Normans. The plan includes a square inner bailey defended by four towers which overlook a semi-circular curtain wall on the land side with a massive gatehouse next to the river.

Kidwelly castle was used in the first scene of the film Monty Python and the Holy Grail.  The surrounding countryside is said to be haunted by the headless ghost of Gwenllian ferch Gruffydd wife of the Welsh prince Gruffydd ap Rhys who was beheaded in 1136, although I’ve never seen her.

It is open to the public most days and is now one of the many castles managed by CADW.  As a family we had CADW membership for a few years when the children were young which was great because we could visit them all free, CADW membership often includes other ancient buildings like Tintern Abbey.  We used to see how many we could visit in one day; I think three was the most we could manage which included Tintern Abbey.

One of my favourite ways of seeing the castle was when my boys used to go kayaking, we went to Kidwelly quay one evening and kayaked with the incoming tide towards the castle and it really looked most atmospheric from this viewpoint, there was a mist coming off the river which created a medieval glow around the whole castle, very often the river scene doesn’t include the modernity of current life, you can’t hear the noise of the road just the sounds of the countryside.  Since being in a kayak and taking a barge holiday on the Llangollen canal I think everything looks more magical from the river.

While visiting Kidwelly you can also catch up with the Sustrans cycle route 4 which takes you on to Ferryside in beautiful peaceful surroundings, or sit in one of the local café’s for a coffee and homemade cake.