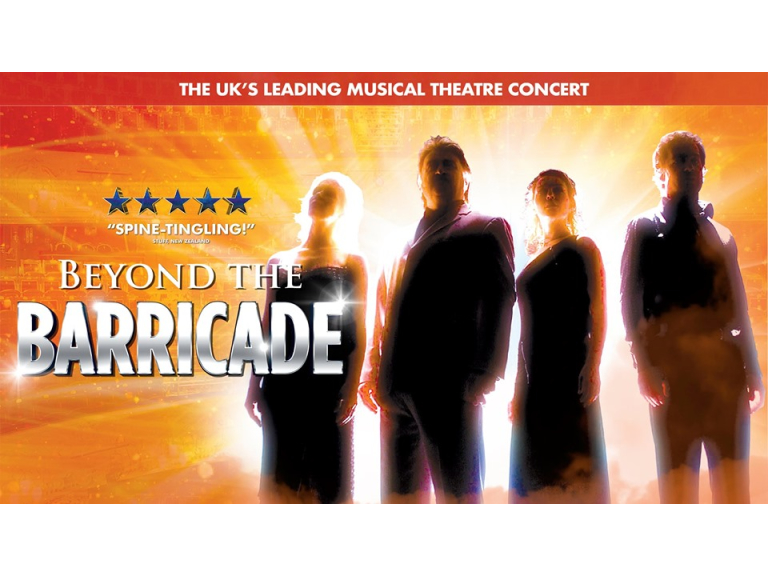 Starring Andy Reiss, David Fawcett, Katie Leeming and Poppy Tierney, together with their own ensemble of talented musicians, ‘Beyond the Barricade’ features songs from The Phantom of the Opera, Jesus Christ Superstar, The Jersey Boys, Blood Brothers, Miss Saigon, Hamilton and many others, climaxing with a finale from Les Miserables!

Andy Reiss and David Fawcett devised ‘Beyond the Barricade’ after appearing in Les Misérables. David played the lead role of Jean Valjean and Andy played most of the male characters, including Enjolras and Valjean.

Also on stage is Katie Leeming, who played the lead role of Eponine in the West End production of Les Miserables. Katie also appeared with the Les Miserables Cast on the televised Classical Brits awards and the Royal Variety Show, and she was also an ensemble vocalists in the Les Miserables movie.

Poppy Tierney played Cosette in Les Miserables on the UK Tour and in the West End. Poppy has also played leading roles in Evita, The Witches of Eastwick, and Miss Saigon. Poppy has just completed filming for the new Abba film, Mamma Mia:Here We Go Again

Contact us
Social Interaction
* thebestof cannot be held responsible for any changes, amends or cancellations of an event
Other local events
Event Categories
Call
Website
Email
We use cookies and similar technologies to improve and personalise your user experience, deliver add personalisation tailored to your interests on third party platforms and analyse our web traffic. Click 'ACCEPT' if you would like to allow all cookies. For more information on how we use cookies, please see our Cookie Policy. Learn More