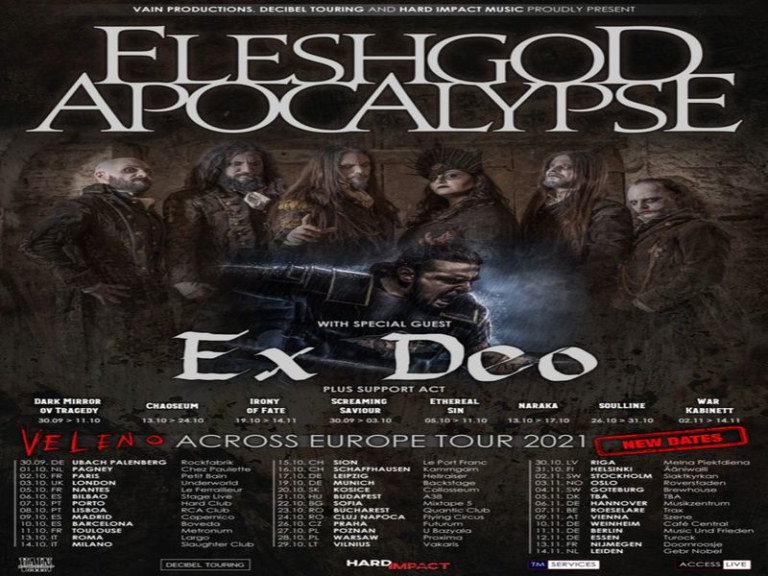 Italian grandmasters of orchestral death metal Fleshgod Apocalypse are finding spontaneity rewarding on new album, Veleno. Over the past four albums – previous album, King (2016), floored fans and critics alike – the Francesco Paoli-led trio have planned every step, discussed every note, and ensured every salutation to Paganini, Bach, and Mozart was met with an equally brutal death metal equivalent. On Veleno, which is Italian for ‘venom,' they needed a change of approach (and pace). To achieve this, Fleshgod Apocalypse distanced themselves from distraction – lineup changes, tours, and the frustrations of day-to-day life – unboxed the songwriting process, and let the inspiration flow freely. On Veleno, they've matured, blended more efficiently their musical vision, and walked away with 11 songs that sound like a new band with an insatiable prey drive.

"Veleno is the most spontaneous album we've ever done," says Fleshgod Apocalypse's multi-instrumentalist Francesco Paoli. "We've always been super-honest with our music, but being honest doesn't mean you are completely spontaneous. For instance, we've never recorded a single note without being 100% sure it was the right one to our ears. But letting your inspiration flow freely, without any kind of time/schedule/sound/lineup restriction, is totally another story. I mean, we definitely experimented with some songs in the past but sometimes it's almost like you feel the need to censor yourself, so to speak. Some days you come up with a really great idea but, for some reason, you think it's ‘too much' for your music and you toss it away. So, the lack of limits, full experimentation, an unavoidable process of rediscovering our roots… all this led us to the most beautiful music we've ever produced. I'm sure people will love Veleno as much as we do."

Formed in 2007 in Perugia by Paoli, bassist/vocalist Paolo Rossi, guitarist/vocalist Cristiano Trionfera, and drummer Francesco Struglia, Fleshgod Apocalypse quickly set off a firestorm of interest after releasing their only demo, Promo ‘07. After a short stint on Dutch indie Neurotic Records, the group signed a deal with Candlelight Records for Europe and Willowtip Records for North America. The result of the deal was debut album, Oracles, in 2009. Based off the first track alone – "In Honour of Reason" – Fleshgod Apocalypse were hailed as Europe's finest newcomers. But it was follow-up album, Agony (2011), where the Italians became maestros of orchestral death metal. Through the use of woodwinds, brass, strings, and percussion, Fleshgod Apocalypse transformed their technical death metal, effectively widening the sonic palette. Albums like the mega-epic Labyrinth (2013) and the ultra-ornate King (2016) followed, ramping up the group's penchant for Bach- and Beethoven-inspired overtures combined with savagely brutal death metal.
"When we founded this band, we had clear in mind that we wanted to do something important with our music and everyone was kind of prepared that it wouldn't have been easy," Paoli says. "All the beautiful memories I have now from these past few years and all the expectations from what's to come make this journey unique and our lives very special. And it's great to make all these considerations having in our hands not just a ‘fifth album,' but the best album in our career. It shows that both our working formula and the idea that what we achieve is never an end point, but a new starting point, are working well. This has also been perceived as a sign of true commitment by the fans. We feel a constant progress as artists and human beings, which makes me really proud of who we are and what we deliver."

But there's one key difference between King and Veleno. That's the absence of guitarist/vocalist Cristiano Trionfera and vocalist/guitarist Tommaso Riccardi, both of whom predate the Mafia EP (2010). Trionfera and Riccardi left the group in 2017 for personal reasons. Their departure have re-shaped Fleshgod Apocalypse, however, with Paoli jumping from the drums to assume the role as vocalist/guitarist. Stepping in to fill the gaps are drummer David Folchitto (Stormlord) and guitarist Fabio Bartoletti (Deceptionist), two musicians with a long history in the various extremes of Italian metal.
"David and Fabio are great musicians and persons and they're doing a killer job live," says Paoli. "It's a first step, we just need more time before adding someone new to our formation. It's like getting married again and you want to be sure everything's working fine. Let me be clear: they are