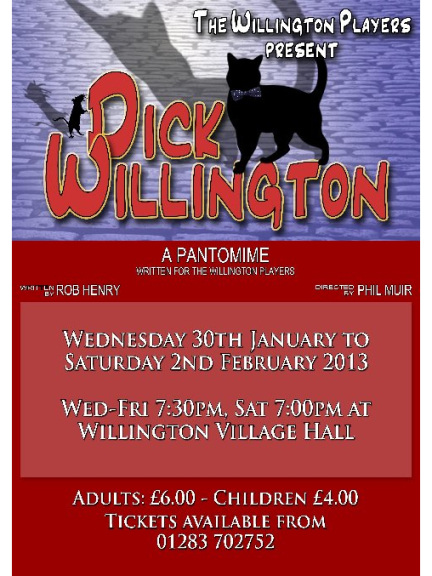 Richard Whittington was a real person, born about 1350. However he was not an orphan, but the son of Sir William Whittington of Pauntley. He arrived in London around 1379, and began to deal in expensive textiles, and became an extremely wealthy merchant and was given the honorary title of Sheriff of London in 1393. In the reign of King Richard II he became Lord Mayor three times, in 1397, 1406 and 1419. He became a MP in 1416. He was very wealthy and when he died in 1423 he gave many generous gifts to the City of London in his Will, including the founding of the Whittington School, the rebuilding of Newgate Gaol, and an almshouse for the poor. The story we know today stood out as a favourite and ‘Dick Whittington and His Cat’ was published in 1605. So popular was this story that when Newgate prison was rebuilt a cat was carved over one of the gates and there was a portrait that showed him holding a black cat in one hand, and a white cat in the other. Sadly nearly all of Whittington’s good works were destroyed in the Great Fire of London (1666) but on Highgate Hill, where he is supposed to have made the decision to return to London, there still stands a statue of his cat, in front of the ‘Whittington Hospital’.

BUT forget all that. To avoid besmirching his reputation further our hero is called Dick Willington and we don’t pretend any of our story is even remotely true! In the Pantomime there will be 2 Acts, each comprising of 7 scenes and an interval in between.

"Expect a unique night out. A pantomime performance is never the same twice. The script, songs, jokes, actors and Set may be unchanged, but each night the audience is gloriously unpredictable.So shake off the January blues and let yourself go. We are depending on you." Says Author Rob Henry.

A peek behind the scenes with Stage Manager - John Parker
Before the pantomime begins there are always a hundred and one props to be set out in the order they are required at the side of the stage. The cast then check everything is to hand. To paraphrase a famous duo “ I have now got all of the right props, not necessarily in the right order! We beg, borrow and steal many of the props. The rest are made by us using a lot of string and sealing wax. Unfortunately, the abuse of these by the cast means that the life of the prop is not always equal to the number of performances of the play. We use a lot of cellotape!

As owners of thebestof Burton On Trent and thebestof Derby we are absolutely passionate about our local community.

If you have or know of the best local business then please let us know and recommend...

What to do with that leftover pumpkin?
Sign up for offers
Sign up for what's on guide
Popular Categories
By clicking 'ACCEPT', you agree to the storing of cookies on your device to enhance site navigation, analyse site usage, and assist in our marketing efforts.
For more information on how we use cookies, please see our Cookie Policy.