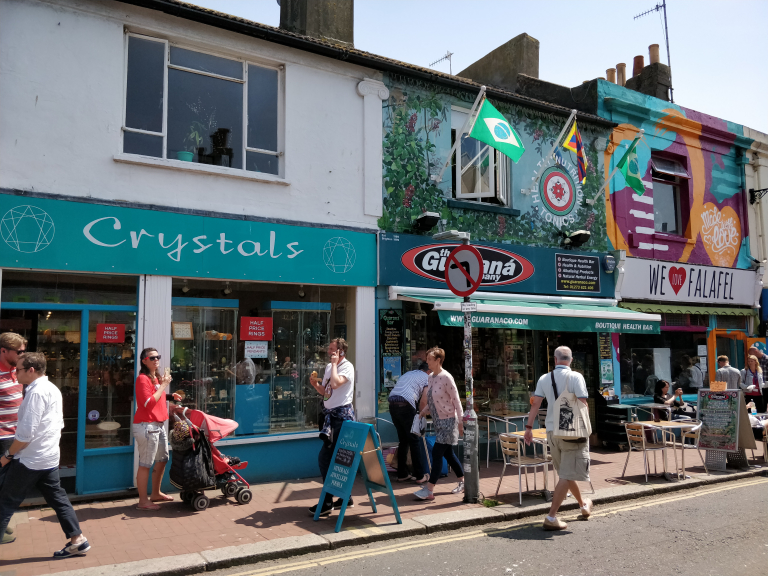 A ‘laine’ is an old Sussex term for a piece of land at the foot of the Downs, which in turn comes from the ancient Anglo Saxon legal term for a type of land holding.

The area was once five open farming plots, laid out in strips in traditional Anglo Saxon style and then sub-divided over the centuries into ‘hides’ and ‘furlongs’.

The 1800s saw the plots surrounded by major roads as Brighton grew. The tracks between the hides soon became streets and the entire area was quickly settled.

The railway arrived in 1840 and Brighton station opened for business.

Between the reigns of George IV and Queen Victoria the North Laine descended into poverty and chaos. It was notorious for its squalor, horrible living conditions and numerous slaughterhouses. Orange Row, for example, which still runs parallel to Gardner Street, was at the heart of the ‘Pimlico’ slum area, housing a sardine-like 130 people in just 17 homes.

George Herbert Volk, the second son of the railway engineer Magnus Volk who created the seafront’s Volks railway, worked at 86 Gloucester Road between 1910 and 1912, today the home of the training company Silicon Beach. And Tom Sayers was another famous resident, born in the Pimlico slum and trained in North Laine. He died in 1865 and was buried in Highgate cemetery, London.

The area was cleaned up in the 1860s and the worst of the old tenement slums knocked down. But as late as the 1960s crime levels down Kensington Gardens were so high the local police christened it ‘Smash and Grab Alley’.

These days area’s residents association, the North Laine Community Association, promotes the area, looks after the interests of locals and retailers and protects the Laine’s character.