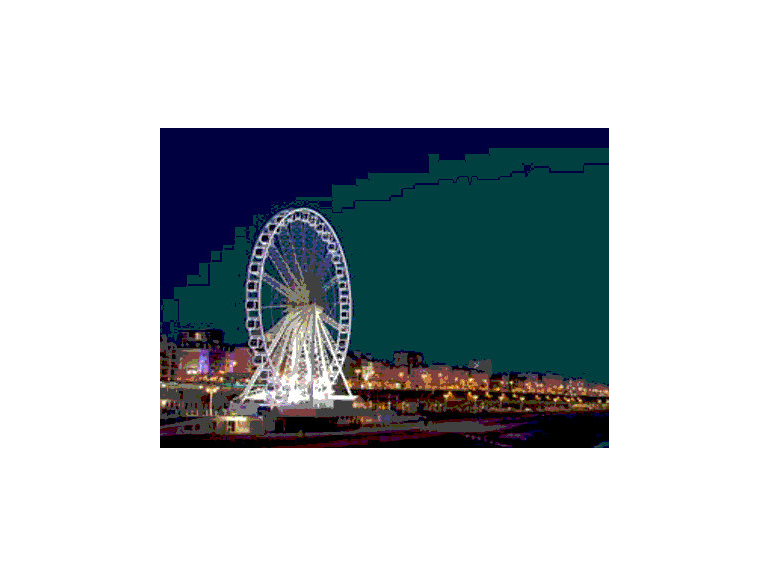 A flint dagger dating back 250,000 years was found in the chalk cliffs of Kemptown, indicating people have lived in the area for a very, very long time.

Head north and you’ll find Whitehawk Hill, overlooking Brighton races, where there are some very fine remains of a massive Neolithic causeway camp dating back to the New Stone Age.

Brighton itself was already well underway, a thriving town enjoying royal patronage. But the land east of the town remained undeveloped until 1808 when a West Indian property developer, Mr Otto, built the Royal Crescent, an edifice in black tile that proved very unpopular.

It wasn’t until several years later, when Thomas Reed Kemp’s development took place, that Kemptown finally started to take off.

Mr Kemp was responsible for the Kemp Town estate, built in open countryside east of Brighton, with four massive squares consisting of 106 homes.  By 1828 only 11 of them had been sold, and by 1824 the number of occupied homes had only increased a little more, to a mere 36. In 1837 Kemp fled abroad to avoid his creditors, leaving responsibility for Kemptown to the Earl of Bristol, who carried on the good work.

In 1844 the London to Brighton railway line made the city truly accessible for the first time. And, according to the snobbish Princess Victoria, later Queen Victoria, things went rapidly downhill, with an influx of middle class hoi polloi. As a result of their common excesses, she abandoned the Royal Pavilion and didn’t come back for two decades. In the meantime the railway-induced building boom led to Kemp’s estate being finished, at last, in 1855.

At the time Lewes Crescent was Britain’s largest, a grand two hundred feet greater in diameter than Bath’s famous Royal Crescent. And Kemp’s masterpieces remain some of the best examples of Regency architecture in the UK, together with the beautiful Brunswick Estate in Hove.

A most impractical railway

The area once had its very own railway, which ran from Brighton Station to Kemptown via two huge viaducts, a tunnel carved right through the Race Hill, a rail station at D'Aubigny Road called the Lewes Road Station, plus a minor station stop at Hartington Road.

The rail journey from Brighton to Kemptown took twice as long as going by road, and the line was closed down in the 1930s, except for freight trains which finally stopped running in the ‘70s. You can still see the old tunnel, the entrance of which is visible from the Freshfield Industrial Estate.

During the 1920s and ‘30s Kemptown began its transformation into a haven for gay men. But in 1939, when war broke out, the beaches were closed and barb-wired against the threat of Nazi invasion.

Just 20 bombs hit Kemptown. If you walk up Edward Street, you’ll see the Victorian terraced houses stop suddenly as you pass the end of White Street. Look up towards the top of Upper Rock Gardens and you’ll see rows of modern houses, which replaced the terraces flattened by a German bomber that was shot down there.

All you need to do is watch the original film Brighton Rock and you can see how seedy the city became in the 1950s and ‘60s. It took decades for Brighton to lose its famous ‘dirty weekend’ and gangster-fuelled reputation.

In the 1980s and early 1990s the Kemptown area became particularly sad and run down. It was one of the last areas of the city to smarten up and become as arty and creative, rebellious and free-thinking, attractive and cool as the rest of the city.

In recent years the area has enjoyed a well-deserved facelift. Today’s Kemptown, known by estate agents as the village, is a little haven of boutiques, delis, eateries and bars. These days it’s highly desirable place to live and the spiritual home of our well-loved and respected gay scene, with countless authors, activists, artists, performers, musicians, movie makers and web geeks adopting it as their own and the area favoured by the avant-garde. Plus, of course, the beautiful Brighton Wheel.

Want to know more? How about sampling the You Tube classic Arty Farty Kemptown video by Terry Garoghan, comedian, parody song writer and well-loved creator of Brighton The Musical.

Putting Kemptown under the microscope

What Makes Kemptown So Special
Sign up for offers
Sign up for what's on guide
Popular Categories
By clicking 'ACCEPT', you agree to the storing of cookies on your device to enhance site navigation, analyse site usage, and assist in our marketing efforts.
For more information on how we use cookies, please see our Cookie Policy.