Sorry this event has now expired. But please check out other great events from the best of Brighton and Hove.
i
Based on the latest Government guidelines, some events may be postponed, cancelled or taking place online. Please check with the organiser for the latest info. 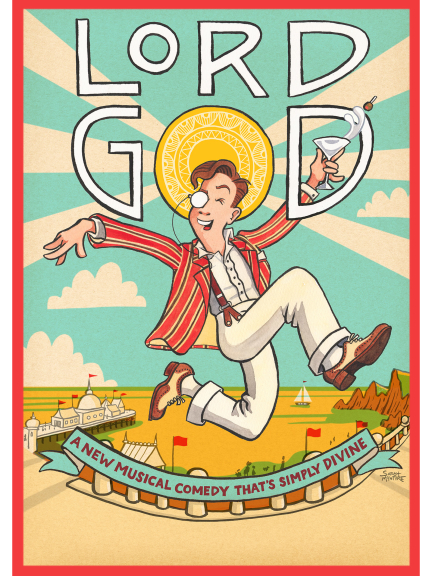 i
Based on the latest Government guidelines, some events may be postponed, cancelled or taking place online. Please check with the organiser for the latest info.
Lord God
Lord God

A Musical by Brian Mitchell and Philip Reeve

When the Lord God is persuaded by His retainer and chief-cook-and-bottle-washer Gabriel to take an incognito holiday in a Devonshire seaside hotel (largely to get Him out from under His angels' feet), He looks forward to a fortnight of uninterrupted tennis, billiards, tea on the terrace and the latest Agatha Christie. But the presence of campaigning atheist Professor 'Minty' Tweddle and her fiance, notoriously hard-to-please theatre critic Rex Addison, upsets His plans and leads to all manner of supernatural scrapes, japes and narrow escapes and the invention of a hot new global dance craze.

Can our hero persuade Minty He really exists?
Can He solve the Problem of Evil before breakfast?
What exactly is Rex Addison up to?
Will Gabriel step in once more to save the Almighty's bacon?

Find out the answers to these questions and all the mysteries of Creation in the new musical comedy Lord God, from best-selling author Philip Reeve and award-winning playwright and composer Brian Mitchell, whose previous collaborations include the recent sell-out stage adaptation of Pugs of the Frozen North and the acclaimed musical comedy The Ministry of Biscuits.

Building on their reputation for thought-provoking comedy, Lord God takes a timely look at morality, faith, and why sometimes it is best not to take things too seriously.
Produced by the “renowned and very popular” (London Pub Theatres) company The Foundry Group, and with a top-notch cast including Joanna Neary (Ideal), and Murray Simon (The Ministry of Biscuits), Lord God promises a night of  witty lyrics, toe-tapping tunes and thoughtful frivolity.