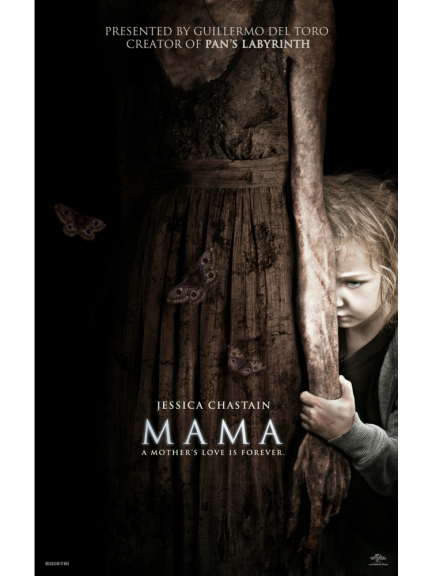 Horror is a personal favourite genre of mine, and there is nowhere better to view one than at the cinema. Which is why Cineworld, Bolton, is the perfect place to go and see Mama, the latest offering from genius Guillermo del Toro.

It's the start of the catastrophic economic downturn of 2008, where bankers were taking their own lives and the lives of others. Jeffrey is one of these, killing his business parters and estranged wife before abducting his two daughters. Fate leads them to an abandoned cabin in the woods, where he turns the gun on them.

Five years later, and the girls are found alive and relatively in good health considering. But they have regressed to feral, animal-like beings, under psychiatric watch. Jeffrey's brother Lucas, and his girlfriend Annabel, are granted the right to adoption.

But there is one more member of this family, the mysterious Mama, who looked after the girls during those years in the cabin. She has watched over them, raised them, yet she now finds she is being replaced. And she is determined to keep her "children".

Having removed Lucas from the equation, Mama turns her attention to Annabel, who has become an unwilling single mother. Annabel realises something untoward is happening, and asks the children's psychiatrist, Dr. Gerald Dreyfuss, for help.

When Dreyfuss stumbles upon the truth, it is left to Annabel to try and save herself, and the two children, from recreating a piece of local history, involving a cliff, a suicidal girl, and her newborn child.

It says a lot when a film can make an audience scream. And this film certainly did that (in fact, I wouldn't be surprised if the poor woman sat behind me is still peering fearfully through her hands). Mama is the classic horror of yesterday, the screaming horror as opposed to the gore-filled modern tales.

It harks back to a classic age of the genre, of flickering lightbulbs, clusters of moths and slamming doors. But it uses what has to be the scariest device available to horror writers, and that is children. There is something so terrifying about a child not acting like a child should.

But this film is helped by something a lot simpler than any special effects, and that is the presence of an actress as talented and special as Jessica Chastain. Mama demonstrates just what a range she has, from the tough woman-in-a-man's World we saw in Zero Dark Thirty, to this vulnerable unwitting single-mother.

The children are also fantastic. And together, the three of them develop a chemistry that is often both touching and chilling, especially knowing that 'Mama' is watching, probably less enthralled to see her grip being loosened.

Guillermo del Toro knows this genre well, eh has proved that so often in the past, and he has done it once again. There are times where you'll be struck with deja vu, as Mama pays homage to numerous horror classics; the flashbulb lighting of Hitchcock, crouched figures of the Exorcist, Alien-like monsters.

And then there are times where you'll only see the palms of your hands. And that makes Mama a great success.