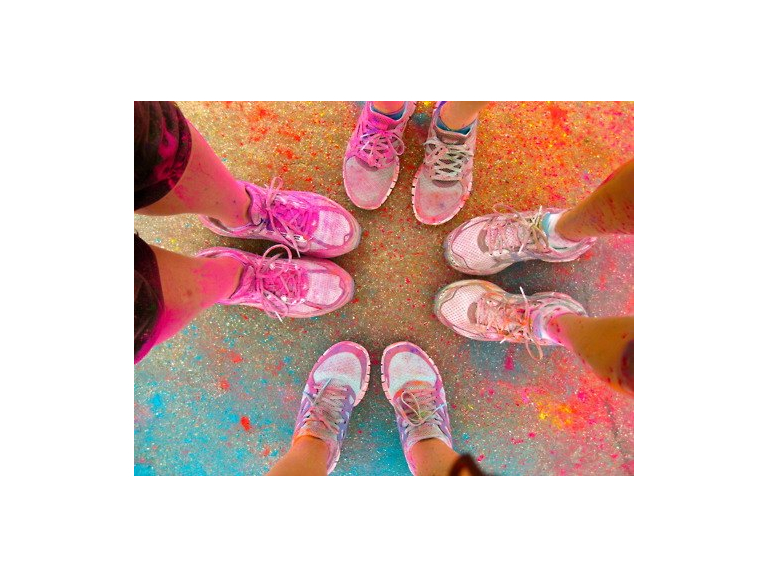 It was a sight to behold as 150 runners were covered in powder paint in Noah’s Ark’s first multicoloured Rainbow Run at Allianz Park, Hendon last Sunday. Starting the race and also taking part was Finchley & Golders Green MP, Mike Freer.

As they ran around the perimeter of Allianz Park on the 5km route the runners were bombarded with all the colours of the rainbow as part of this exciting fundraiser.

Among the 150 runners were members of the Kelly family who are supported by the charity. Dad Steve and son Jamie ran the course whilst mum Rachel and younger son Ethan were part of a paint throwing team.

Speaking after the event, Rachel said: “Noah’s Ark supported us as we dealt with the loss of our daughter, Jessica a few years ago and they continue to do so. We all love going along to family days – it gives us a real link with the times we enjoyed with Jess when she was alive.

Rachel continued: “Jess would have absolutely loved this event – her favourite colour was pink. What a fantastic event and such a fun way to raise money for such a worthy cause. We owe a debt of gratitude to all the staff and volunteers who work so hard to support families like us.”

Also taking part was mum Karen and daughter’s Nicole and Addy. Karen and the girls have been supported by Noah’s Ark since 2010. Before the race started she said: “We’re all really looking forward to taking part and being painted.”

Here’s what they had to say: “I’m definitely doing it again next year.” “Best day ever.”

“I would like to thank Mike Freer for starting the race and for taking part; Fitness Vibe for the pre run warmup; sponsors Martyn Gerrard Estate Agents and supporters Allianz Park, Como Resorts & Hotels, Tesco and Investment Mastery. A big thank you also to everyone who took part and raised so much sponsorship."

“The money raised today will be used by Noah’s Ark to provide vital practical care and emotional support to families with children who have life-limiting and life-threatening conditions living in North London. Today’s event was a great success with lots of smiles and laughter. Here’s to our next one in 2015! Watch this space!”

Check out the Noah's Ark Facebook page at for all the great pictures from the day.