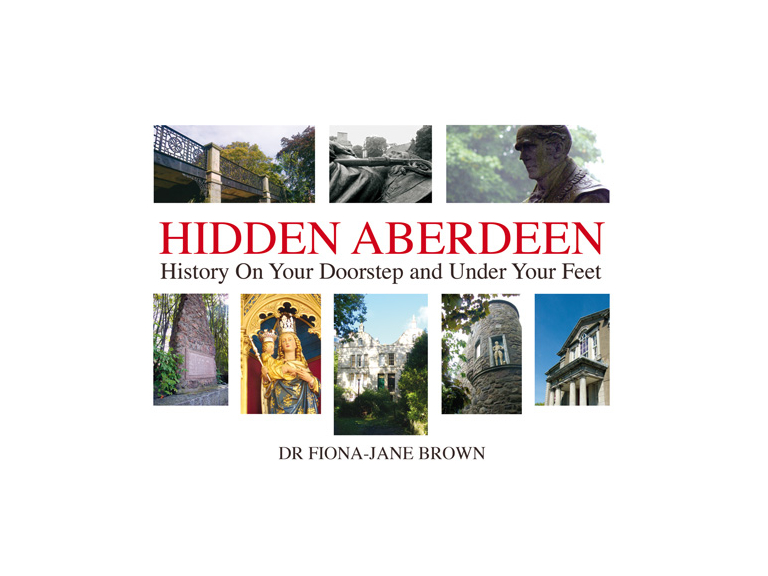 Hidden Aberdeen takes a fascinating look at the history of the Granite City. From Dr Fiona-Jane Brown, folklorist, educator, storyteller and founder of Hidden Aberdeen Tours, comes a book that will open your eyes to the hidden, the forgotten and the abandoned remnants of the past which lie under your feet as you walk round the city today.

This book is packed full of peculiar tales, and it seems around every corner in Aberdeen there’s a wealth of human history associated with every building, street and stone.

There’s the story of the ghost of Chaplains’ Court, who’s spectre was seen as recently as the 1920s, and the tale of the the thousand-year-old early Christian graves near the grounds of St Nicholas Kirk.

There are famous names such as Robert Hitchens, the man at the wheel of the Titanic when it struck an iceberg who is laid to rest in Trinity Cemetary; and talk of Aberdeen’s royal connections including the visit of the ‘Old Pretender’ in the midst of the 1715 Rebellion.

Grisly goings-on also feature, with the brutal murder of a monk by so-called reformers, and with Gallows Hill, the spot where medieval criminals were hanged. There’s also tragic stories found in the St Nicholas Poorhouse of Nelson Street but there are uplifting ones too, with the Aberdeen Public Soup Kitchen that operated for over one hundred years.

Open this book and see what lies beneath. Aberdeen will most definitely surprise you. Dr Brown holds a PhD in Ethnology, gained in 2010 after studying at the Elphinstone Institute, Aberdeen’s unique centre for the study of North- East Scottish folklore. She has volunteered with the Aberdeen Urban Studies Trust and now assists at the Old Torry Community Centre.

Dr Fiona-Jane Brown lives in Aberdeen and is available for interview.

You can meet Dr Brown at the launch on Tuesday 18th June, 6.30pm in Waterstones, 3-7 Union Bridge, Aberdeen.

Empower your Customers with Self-Service